I've watched cats get off-the-ground-and-in-to-the-air-like-a-cyclone-wound-up batting an apple around the floor. You have to wonder what thoughts are whirring in and around their tiny processors. And although I've never witnessed it, I bet it's not unusual for one of these psychos, in a full on frenzy, to end up having taken bite taken out of an apple at some point. And if a bite is taken and ingested, what happens?

As it turns out cats can eat a slice or two of apple now and again without harm, but those apple seeds are killers. Unbeknownst to me, apple seeds contain cyanide. They contain only a small amount so they won't harm humans, but cats are too small to handle them. I find it unlikely however, that the attention span of said cat will get them that far into an apple core anyway, no offense.

Posted by claudiadiller at 7:49 AM 3 comments: 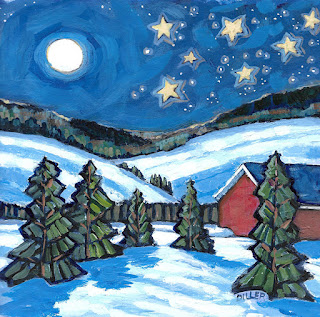 When the local bears relax into hibernation, I wake up. I become a processing center for calendars - thank you to my fans for a fabulous year, and buy into holiday merrymaking like a fool. So when January rolls around, unlike getting back into the saddle, pedaling a bike and swinging a baseball bat, I begin the slow tortuous and arduous process of getting back into painting. What is it that makes us think we can start where we left off? Is it an invincible boomer thing - a reluctance to look our future in the eye without tinged lenses? Maybe.

In the meantime, here's a simple wintah painting. While I understand many are up to their ears in it already, winter is still an awful/pretty time of the year here in Maine when we settle down and take a minute to look around.