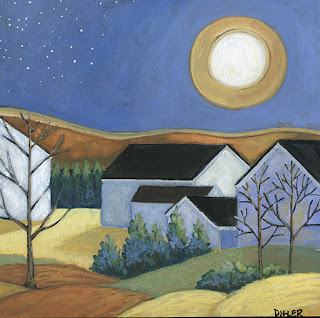 Be in peace this Thanksgiving.

Posted by claudiadiller at 4:49 AM No comments: 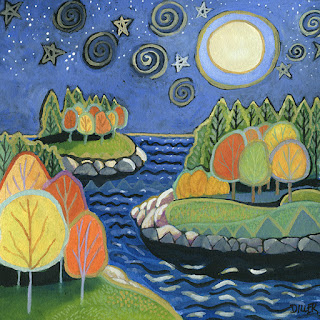 Our first snow fell overnight. The inch of it will melt away and be gone by tomorrow probably. So before we loose all color out there, I thought I'd throw in the last of it. It's a long winter.

Posted by claudiadiller at 7:10 AM No comments: 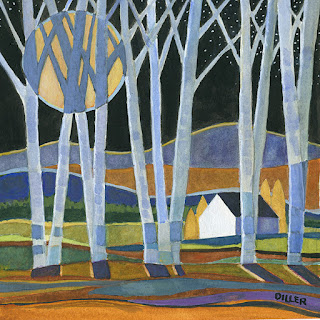 November derives from the Latin root novem- meaning “nine.” Why you ask? Because in the Roman calendar there were only 10 months in the year. November was the ninth month. So why were January and February added you ask?

A quick reference to wikapedia states:

"when the Romans used a 10 month calendar, they still had a kind of 2 month gap (at the time 50 days), which eventually came to be known as January and February (Janus and Februa) or the winter season.

The eventual goal in all the calendar making then and to this day, was to have a calendar that stayed in sync with the seasons. But in those days, with only the marking of number of days, and hourglasses, exact timing of a year was not going to happen. It took almost a thousand years for the Julian calendar errors to be found and another 500 before it was corrected.

Today we know the Tropical Solar year is 365.24219 days. The current Gregorian calendar is quite accurate, being off only 11 seconds in 400 years, and no additional changes would be needed for at lest a couple millennia."

Posted by claudiadiller at 7:27 AM No comments: 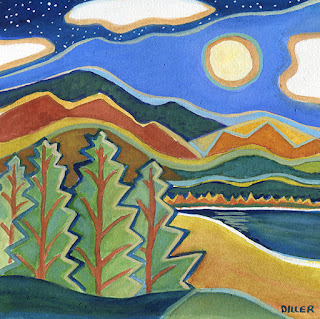 as the sun bows,

will on occasion loom

for when the moon's light,

and out of sight

we too defy night and play.

Posted by claudiadiller at 11:25 AM No comments: 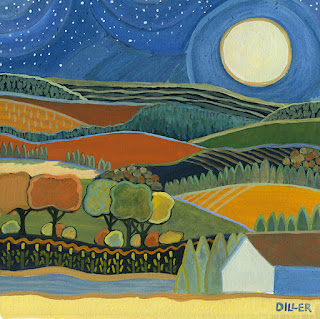 I ran into a book I haven't read yet by Phillip Caputo while researching this month's moon. Hunter's Moon; A Novel in Stories was written in 2019. I did read A Rumor of War, published in 1996 a long time ago. It's a good read.

“So I guess every generation is doomed to fight its war, to endure the same old experiences, suffer  the loss of the same old illusions, and learn the same old lessons on its own.”  - Caputo

In the meantime, the actual Hunter's Moon was named by native Americans because it was the time of year they hunted wild game to stock up for the winter months. With this moon they could hunt longer into evening. We painters could and can also paint late into the evening!

Posted by claudiadiller at 12:36 PM No comments: 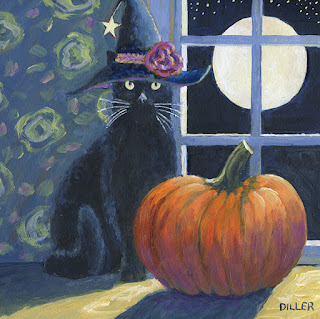 I've been thinking about our Halloween traditions in this country. Halloween is when all rational thinking is thrown to the wind, when we become our own worst fears fed by horror films we dare ourselves to watch only on Halloween night.

Why witches, ghosts, black cats, crows, ravens and pumpkins I asked myself as I painted along? I was suddenly struck by how much it reminded me of the bunny and egg thing on Easter. The ghost I get because of the Christian celebration of Old Souls/Saints Day on November 1, but the rest of it is puzzling.

So I decided to research starting with the history and superstitions surrounding black cats to try to make some sense out of it all. I've written about this before, but have forgotten most of it except for the one about a black cat being a witch in disguise. I kind of like that one and want to hold onto it as truth... during Halloween anyway. The bad luck and good luck stuff is not as much related to HAlloween, but good to know!

Earliest Association with witches
According to Greek mythology, Zeus’s wife Hera once transformed her servant, Galinthias, into a black cat as punishment for impeding the birth of Hercules. Galinthias went on to become an assistant to Hecate, the goddess of witchcraft.

Black cats are witches
This story began when a black cat was seen running into a house thought to be inhabited by a witch during the Middle Ages and became equated with black magic. Roaming nocturnal black cats were thought to be witches in disguise, witches' pets, or animal-shaped demons sent by witches to spy on humans. From the early 13th century in Europe through the 17th-century Salem Witch Trials in Massachusetts, black cats were killed along with those who were considered witches. Black cats have since evolved into icons of anything related to witchcraft.

A black cat is also associated with bad luck and death.
This fear of black cats appears to stem from medieval times, when an animal with dark feathers or fur, including crows and ravens, signaled death. In 16th-century Italy, it was believed that death was imminent if a black cat laid on someone's sickbed. It’s considered bad luck if a black cat crosses your path, and good luck if a white cat crosses your path. Another family member is bound to die if you spot a black cat during a funeral procession. And it's a bad omen if you see a black cat walking away from you. Fortunately, all these ideas are just superstition.

Black cats are also believed to bring good luck
In ancient Egypt, black cats were held in the highest esteem because they resembled Bastet, the cat-headed Egyptian goddess of home, fertility, and protection from disease. Black cats are considered good luck in other parts of the globe, as well.

Posted by claudiadiller at 1:20 PM No comments: 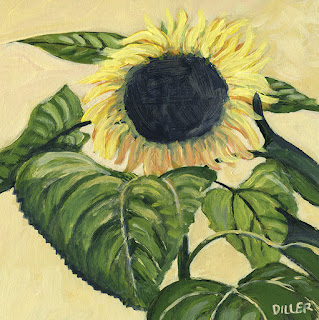 Click here to purchase this painting #419
http://www.claudiadiller.com/blog.htm
I was tending to my sunflowers recently, and one in particular - the tallest, caught my eye. It, like the others, had survived an onslaught of drought and pestilence this summer. It is not perfect, or even beautiful compared to others I've seen. It's lower leaves are chewed and full of irregular holes and unsightly spots. I cut them off to open up other flowers to light. Petals are thin and curling. But those irregularities and scars are what makes it interesting to me.
I feel the same way about a lot of things. Acceptance of things as they are gives us permission to accept imperfection in ourselves. Nature reminds us that we the imperfect can be out there saying, mostly to ourselves, yeah well, I'm interesting!

Posted by claudiadiller at 7:06 AM No comments: