claudia diller: The Three Ducks: "The Three Ducks have been co-habitating with me for about twelve years. I bought them when I moved to Portland. I needed friends and they di..."
Posted by claudiadiller at 5:27 AM No comments: 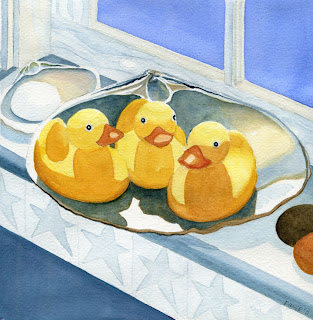 claudia diller: A good bath: "I don't know why I painted this. Maybe it's because sometimes I just feel like taking a bath. In the winter I take time-bending journeys to ..."
Posted by claudiadiller at 5:11 AM No comments: 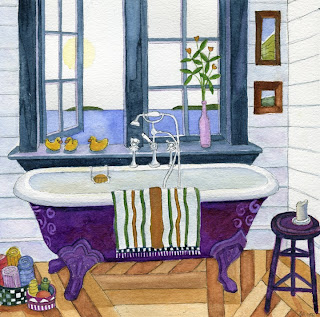 I don't know why I painted this. Maybe it's because sometimes I just feel like taking a bath. In the winter I take time-bending journeys to places like summer to try to remember what it feels like to be hot.

I wasn't in the habit of taking a bath until my doc suggested two cups of Epsom Salt in a hot water bath for no less than 15 minutes for muscle ache. It works great! This prompted me to go on a factoid-finding mission about bathing in general. Could it be that bathing is not just a hedonistic pleasure - that there is a good reason to take a bath? This is what I found out:

A 10 minute soak in hot water can improve heart health, especially for men.

A cold bath (12 to 18 degrees Celsius), is great for reducing tension or stress. It narrows blood vessel and increases sugar level in blood.

Rashes and hives can be treated by adding adding baking soda to bath water. It acts as an antiseptic.
Soaking feet in hot water helps in healing flu, headache and refresh back exhausted feet. Put enough hot water in a container until it sinks down the ankle then add into it a few drops of oil such as lavender, peppermint or lemon. After that, wash your feet with cold water.

Soaking feet in cold water is great for you who have insomnia problem or problem to sleep. Put your feet into the cold water until they feel cold. This technique is also said useful for sore feet.

So there you have it. If just wanting to take a bath once in a while is not a good enough excuse for you, you can now play the health card. OMG - what have we come to!

claudia diller: Sailing Along the Coast

claudia diller: Sailing Along the Coast: "Whoa - it's sunny! After 40 days and 40 nights of overcast and arctic air mass, there's not a cloud in the sky and the temps are supposed to..."
Posted by claudiadiller at 6:08 AM No comments:

Sailing Along the Coast 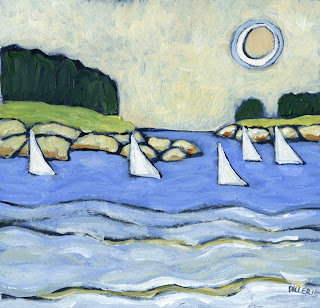 Whoa - it's sunny! After 40 days and 40 nights of overcast and arctic air mass, there's not a cloud in the sky and the temps are supposed to climb into the 40s. We're heading for the coast - maybe Camden!

My childhood friend Morgan is visiting from Sacramento, CA. She had a choice of going to her house on the Baja in Mexico or coming to Maine for her week off. I really wanted to encourgage her to go to the Baja, but didn't want her to feel like I didn't want her to come here. So I tried to make Maine sound as good as I could this time of year.

As it turns out, and it's the way it always goes when two good friends get together after a long time, we've been having a blast. After a few days doing the cultural thing in Portland, we traveled inland for a day and night in Kingfield to show her the two sides of Maine. We got shanghied in Kingfield for an extra night - ice storm, but as it turned out - we had a delightfully mellow indoor day talking, reading and watching a few videos. Who gets to do that these days!

Today however, I will try to describe summer in Maine as we cruise along the coast. She might get the idea looking through the windows of the car. There will be a rude awakening when she steps outside, but during this time of year in Maine, the 40s are going to feel like spring.

claudia diller: Meyer Lemons: "This is not a painting of lemons - it is a painting of Meyer lemons! They are probably the sweetest, tastiest lemons I have ever consumed. I..."
Posted by claudiadiller at 4:23 PM No comments: 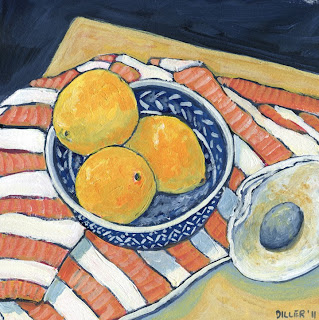 This is not a painting of lemons - it is a painting of Meyer lemons! They are probably the sweetest, tastiest lemons I have ever consumed. If like me you have never had the profound privilege of tasting one of these little gems, it is something I would recommend for your food bucket list.

I received four Meyer lemons from my friend Bobbi. Her son lives in California and happens to have a Meyer lemon tree in his back yard. He shipped her a box. When she asked whether or not I wanted some, I said yes. I never refuse food of any kind. Later, and in all honesty, I couldn't fathom why someone would go through all the trouble of shipping lemons across the country if you could get a perfectly fine lemon right here in Maine. It piqued my curiosity so I went on the web to find out what this particular lemon was all about.

In the early 1900s, the USDA sent Frank Meyer, an "agricultural explorer," on many trips to Asia to collect new plant species. He brought back to the US over 2500 new species of plants, one of which was a dark yellow lemon that was a cross between a lemon and a mandarin orange. The lemon was used as a decorative houseplant in China for a century before someone decided to bite into one. It has a baby bottom smooth deep yellow skin with a thin edible rind, lots of juice with absolutely none of the tartness of a regular lemon.

The Meyer lemon thrived in the citrus belts in this country, but because of it's thin, delicate skin and high juice content, was too fragile to become a commercially successful product. It was only sold in the citrus belts exclusively unless of course you were fortunate enough to have a son who happened to live in one of those belts and shipped a box to you in Maine!

Most of the Meyer lemon trees in California were destroyed by a virus in the 1960s however, and because it had the potential to spread to other citrus trees, they were all destroyed with the exception of one stock which was was declared free, and subsequently cleared of disease. It was called the "Improved Meyer Lemon" tree.

Today the Meyer lemon season begins in November and extends into March - sometimes April. If you happen to come across one of these delightful fruits while perusing your favorite grocery store, pick one up. You will never go back!