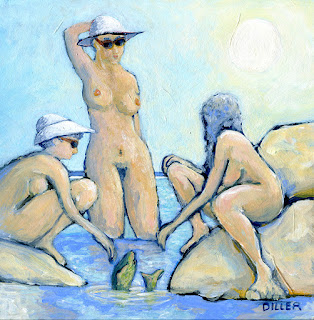 There's talk of a reunion buzzing around out there for my high school class. Watch out - stand back!

Because I spent an inordinate amount of my youth at the beach, where water was the only escape from a wall of stifling summer humidity, a humorous image wafted through my mind on a soft little sea breeze.

Early morning risers, we old boomerettes are off to the beach wearing large prescription sunglasses, protective hats and water sandals, carrying gigantic colorful all-cotton beach towels and a village of umbrellas. It's quiet and bright - a hazy, diffused bright, that illuminates our perfect 60s vessels  -  personal road maps showing sags, scars and wrinkles that mark childbearing and/or other major events in our lives.

We ease our way in to the shallows and mill around the breakwater, communing in the peace. After catching up on the present, we inevitably reflect on the past. Maybe we could have done more than we did to make the world a better place - we certainly had the energy. But we're also proud of what we did accomplish nevertheless.

The world would have been a lot worse, we surmise, if we hadn't stood up for world peace, even if it was just refusing to support war, corporate greed and the destruction of our planet in our personal lives. 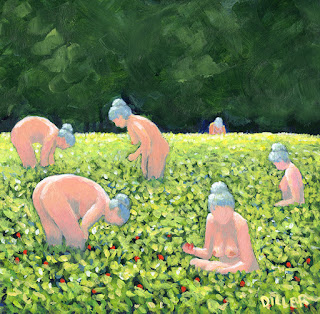 Early one late spring morning I drove out to Cape Elizabeth to pick strawberries, craving some for breakfast, and maybe some inspiration. I got both.

Pickers were already scattered across the field by the time I got there. Youngsters were grazing, their mouths smeared in red. Mothers were giving the "this is not something we do" talk, to no avail. There were also a couple of serious muti-tray make-jam-and-freeze-it grandmothers gathering for the winter months. And then there were the rest of us rookies - picking for a meal or for something "springish" to do while the sun lasted.

The light was a typical Maine morning haze - soft and bright as it filtered through the trees dissolving what was left of night's lingering dark. At one point, I stood up and took a look around. And that's when I saw it. There we were, my fellow boomerettes and I humming Chelsea Morning as we lumbered along, picking and eating psychedelic strawberries in the nude. It was a Get Me Back To The Garden Strawberry Fields Forever Elder Boomer Happening. 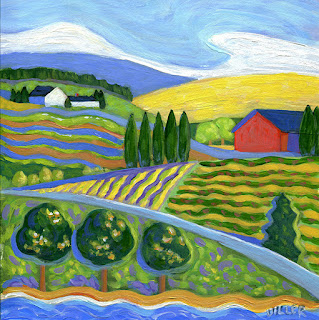 As the summer in Maine moves along, I begin to notice primary colors and shapes in the landscape. 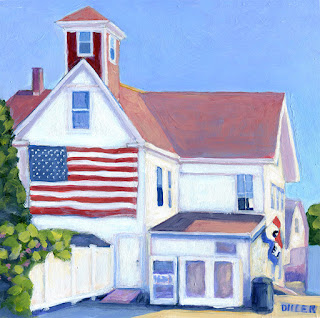