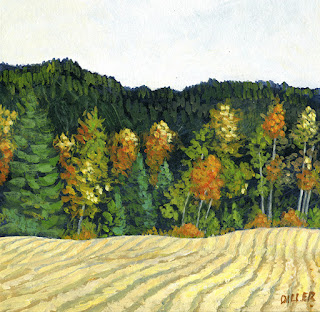 I just finished E.M. Forster's classic Room With a View. I had never read it, or at least I don't remember ever having read it.  It was delightful and insightful, full of foibles and poils of wisdom. It's fun to jump in to non-fiction like that once in a while. Too much of it though, and I get carried away.

I found myself looking at rooms with views afterwards. Maybe I needed this exercise to realize how fortunate I am. We have views everywhere we look.  The only exception is our neighbor to the south. Their house sits fairly close and broadside to ours. But for some reason it doesn't bother me. I like the closeness of community and I do love them dearly.

This is the view from our kitchen. It really is stunning, for a field anyway, and as it appeared on an  overcast day when it had just stopped raining. All was quiet. Once in a while we'll catch a glimpse of a few deer out along the darker treeline before they make their night time prance across the field, the road, and to the salad bar that is our cedar hedge. 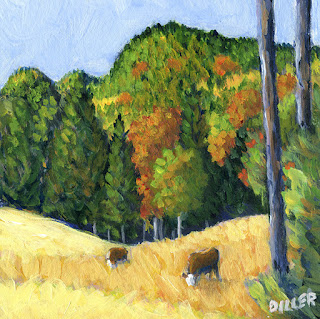 I've been reading an odd but entertaining little book entitled Driving Mr. Albert by Maine author, Michael Patertini. It's a journal by the author about his time spent with Dr. Harvey, the guy who stole Albert Einsteins brain. The two of them drive across the country together with a couple of pieces of Einstein's brain floating in a Tupperware container full of formaldehyde stashed in the trunk of their car. Their mission is to meet with Einstein's granddaughter. The reason is never really fully discussed, nor is whether or not she will actually receive them.

This is my kind of non-fiction. It's also sort of like what it's been like for me driving around Maine this fall. I feel like I've had another brain in the car.

Have you ever been tooling down a road, with your head wrapped up in a thought experiment, when suddenly a piece of landscape up and hooks you by the corner of your eyeball and knocks you on to another planet with a - whoa, what was that? It's been happening a lot lately. The foliage has been unfurling distraction to the point of dangerous. We're all languishing in a kind of sense-saturated stupor. You start seeing things you've never seen before. It's reminiscent of a good old fashioned 60s shroom trip, except it's legal and you can still drive normally.

Sailing though the foothills the other day, I was caught by this sweet little snapshot through the trees. The colors are on the other side of brilliant now, but still a nocturne. That knobby knoll in the background? It really is shaped like that. And the trees in the foreground weren't really violet. They just appeared to be.

SOLD - Bewitched By the Moon 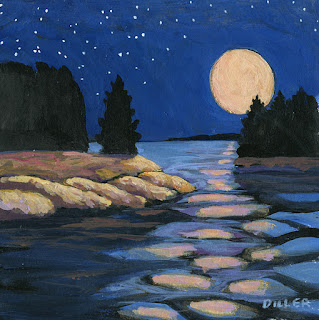 I have been thoroughly bewitched by the moon - and it's not even visible right now. I think I might have been zapped during the super moon. I don't remember this ever happening to me before - not even during menopause, the mother of all phases. Of course it is that time of year. 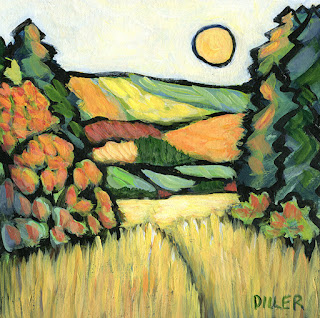 Leaves have begun their astoundingly beautiful downward death spiral - a morbid thought for such a beautiful process. But it is fall, after all.

While I was reminiscing about the good ol' days when you could take a long autumnal walk in the brisk mountain air through fields of tall grass, without fretting about contracting Lyme Disease, it suddenly occurred to me that I had just used the words fall and autumn interchangeably. Have you ever wondered what the difference between autumn and fall is? Me either. Here you go, from the Grammarist.

"Fall is in fact an old term for the season, originating in English in the 16th century or earlier. It was originally short for fall of the year or fall of the leaf, but it commonly took the one-word form by the 17th century, long before the development of American English. So while the term is now widely used in the U.S., it is not exclusively American, nor is it American in origin.

Autumn came to English from the French automne in the 15th or 16th century, but it didn’t gain prominence until the 18th century. After that, while fall became the preferred term in the U.S., autumn became so prevalent in British English that fall as a term for the season was eventually considered archaic. This has changed, however, as fall has been gaining ground in British publications for some time."