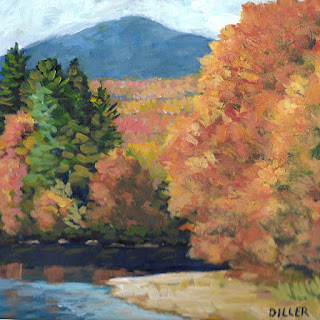 The leaves were already on their way out by the time I found time to stop and snatch this sketch. One of these days I'll do it justice, but right now, it's the way it looked just before the big blow.

I guess I was taking it for granted - it's a scene I see every time I go over the bridge in Kingfield. This is one of the reasons some of us live up here. As a local transplant once said to me when I asked him why he left Brooklyn, New York, "you can't beat the commute to work." 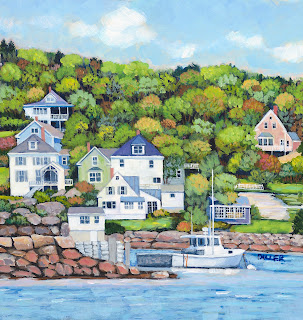 There aren't too many of them left along the coast of Maine - places where fishermen live where they work, that is. There's a little stretch in Stonington where the natives seem to be hanging on. It doesn't seem to change much from year to year, thankfully.

A sure sign that things might be tipping for the worse, however, was an experience we had this past summer. You never used to have to worry about getting a real Maine lobster roll in Stonington, but  my daughter - she was so excited, bought one in town, closed her eyes, opened her mouth big and wide and took a bite three times her size only to discover that someone had put tarragon in the mayo. Who the hell puts tarragon in the mayo in a lobster roll, she gagged? I didn't mind it too much, but it sure wasn't what I was expecting either. Is there a curse that can be used on these interlopers who think they can change the real Maine lobster roll and get away with it?

The week before we hauled the boat is when I saw the biggest full moon I've ever seen.

We had dinner in Rockland and then watched Maiden. I had seen it. Tom had not. The guy behind us was on his fifth go around. The Strand is a great little theater.  But Maiden was even better. It was a great night. Fun dinner, beautiful theater, great movie. A trifecta.

On our way back out to the boat in the dark, I was in the bow of the dinghy scanning for navigational markers and lobster buoys with my penlight. We would have been thrown in the clinker had we been caught by marine patrol. Actually we could have been run over by a cruise ship. But we weren't.

Tom spotted it first - over my shoulder. It was so big I couldn't see it at first. And then I did. A monster was cresting over Vinalhaven. That's the biggest f...... moon I've ever seen, I exhaled. And it was. We watched it float up and into the cloud bank, and that was the end of the show.

And finally, who had the most cribbage wins for the 2019 summer sailing season? It wasn't Tom!