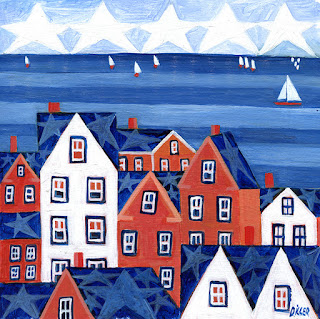 I always pause to thank our servicemen and women who have died in wars on Memorial Day. It makes me sad - war sucks. So I don't linger there long.

Instead, I honor them every day, as many do, by trying to be a better person, and to work for a better community for all. Despite the current state of government and the hard work we have ahead, I can still see their sacrifices and how they contributed to our good fortune everywhere I look. 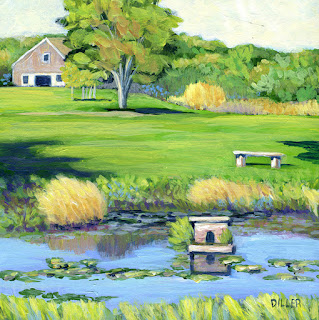 My daughter was here last summer on a rare trip home. We decided to spend a few days on the hunt for Maine's best lobster roll under the guise of a mission to visit areas in the state she had never been to before. It was too hot, even for a beach day, and the only relief was my car's air conditioning. So it only made sense to meander along the mid-coast of this great state looking for the perfect lobster roll.

Along the way we passed this beyond real and idyllic-looking duck pond out toward Orr's Island. I jumped out to take a quick pic. We were both getting cranky with hunger and thirst at that point, so I really had no time to study the subject. In fact, I hadn't revisited this photo until now, when upon closer inspection, I saw a duck head, or so it seems, in the opening of the duck house. It brought to mind a film I saw back in the 60s called Blowup. In that film, a photographer thinks he has accidently taken a photo of a murderer - a face that appears as he is developing the image of a seemingly innocent-looking park scene. It could be a man's face that appears in the leafy background of his photo, or not. In any case, it was an extremely tense one and a half hours.

For fear of incriminating the duck and endangering my own life, I decided not to include the duck in my sketch.

SOLD - Finally Getting Her Due 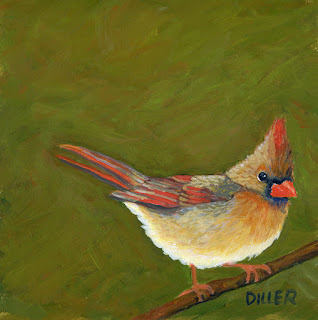 I'm being stalked by a pair of cardinals. They follow me around my Portland neighborhood, egging me along my exercise route. I think I'm bird watching, but don't want to admit it. In any case, I figured I'd sketch them.

Both the male and female are really visible right now because the trees are still bare. I was going to sketch the male, the almighty the colorful one, but have already done him. So I decided to explore the female. As it turns out, and much to my surprise, the female is a way more interesting study than the male. Who knew?

So here she is, finally getting her due. Wait! Why does this sound familiar? Oh I know - I believe it's one of many themes in our current presidential race.


Posted by claudiadiller at 6:27 AM No comments: 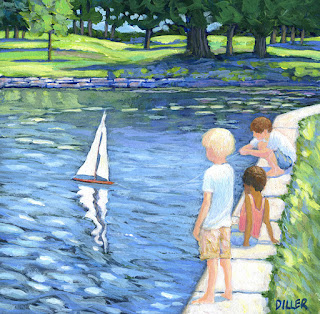 Today my daughter Heather and I share a birthday. I always explain to people that she came to this planet to teach me how to be a less selfish person. It didn't take. So I was given a second chance a few years later with the birth of my son Brecken. That didn't work either.  I'm happy to be able to say that my life was redeemed - their message finally got through, and today I consider them the greatest gifts I will ever receive.

Children bring  good fortune to our world. The lessons they hand out are tough, the situations thereof challenging, but in the end they are always this world's greatest examples of love and compassion if we open up our hearts.

On this birthday I wish Heather a beautiful day. I also throw out in to the universe a wish for all children to be relieved and healed of their pain, and that the world, in doing so, recognizes all children for who they really are and what they came in to our lives to teach.

Posted by claudiadiller at 11:15 AM No comments:

#252 The Necessity of Forging Good Memories 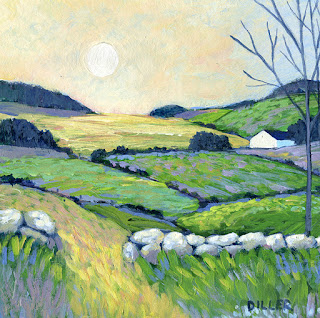 I was speaking by phone with a friend up in the western mountains. It's snowing at Sugarloaf. I find this depressing having just planted my lettuce seeds and onion sets.

Today is a lesson in the importance of forging good memories. This painting is one of those good memories of a spring past. I keep them planted in my mental garden. It depicts a May when, groggy with spring fever, the sun and I appeared a bit hazy on the rise.

It only takes the memory of one good spring to keep us in motion on a day like today. It enables us to get out of bed in the morning, to put one foot in front of the other, and serves as a reminder that our days need to be dictated by how we feel on the inside, not what is going on out there.