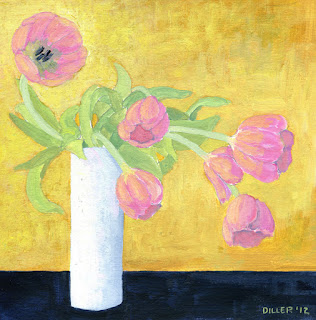 I've been catching up with the Sherlock Holmes series on Masterpiece Theater. It really changes the way I look at things these days. Take this simple vase of tulips sitting atop my work table during a dark, stormy, rainy day in Maine for an example. It was obvious to my newly trained eye, that they were pointing to the exact location of my lost car keys. 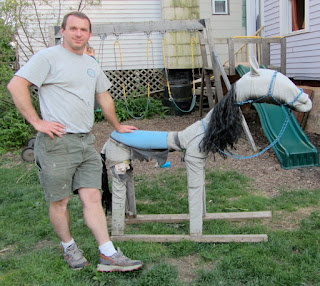 I love this horse - it reminds me of a very fun childhood. He will probably re-gift it to his kids some day in another form. In the meantime I felt it critical - as a fellow artist and lover of all steeds great and small - to immortalize the beast before it too becomes a memory.
Posted by claudiadiller at 6:23 AM No comments: 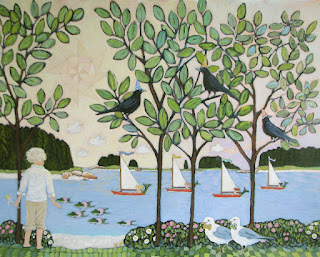 This is a birthday painting. It isn't finished, but I'm done with it for now and will wrap it up tomorrow.

I have determined that I have choices, and that from here on life can either be ho hum or incredibly magical. Today I chose magical and woke up this morning to see a big bright pinwheel in sky, two gulls in bow ties, three crows in party hats, four mermaids sailing, five piggies flying and six fish in tutus. It has been a spectacular magical day!

It's also my daughter Heather's birthday, so this painting is a reminder to her that she too can see the world as magical, if she so chooses.

Posted by claudiadiller at 2:07 PM 2 comments: