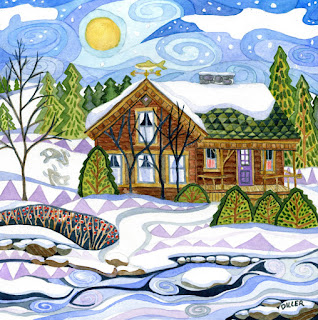 I can feel winter but I can't see it yet - there's no snow on the ground, no ice in the waters. The predictions for Maine are for more snow than normal and colder than normal. I hadn't been paying much attention to the weather, but as THE winter holiday swell begins to build, I started getting nervous and looked it up.

For those of you who read your horoscope everyday, here's a blow by blow.
http://www.almanac.com/weather/longrange/ME/Portland

In the meantime, I painted this to remind myself of how pretty winter in Maine can be.

Posted by claudiadiller at 3:42 PM No comments: 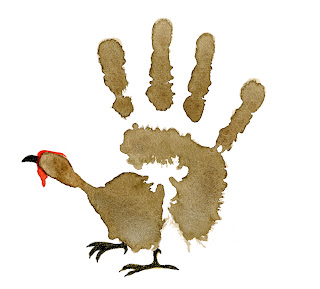 This Thanksgiving I am reminded of something I forget about all of the time. Choice. Whenever I finish reading my morning dose of world, national and local news, I feel like I have very little of it. I have to put myself through a debriefing program because though being informed is critical, what I read needs to be filtered through a voice of reason so that I can navigate my day without seriously dope slapping the bad guys and duct taping mouths of irrational, narrow-minded idiots.

I practice the fine art of choice with smaller, more personal choices. Black or white, drive or reverse, cash or charge. Today I'm choosing to be childlike versus adult-like. It sounds trite en lieu of what is going on out there in the world, but so far it's been monumental. It requires a major shift to naivety and wonderment which so far is taking constant vigilance. It's a tough thing to achieve in this world and these days. Even kids seem to be struggling, and they're supposed to be our reminders and inspiration for heavens sake.

This Thanksgiving painting is a reminder to me that though life can be damn tough, and certainly tortuous and unpredictable for millions of people in this world, I am fortunate and enormously grateful every day that I still have choice and that I know how to choose to have mystery and magic in my life. I choose to be childlike, not to take the place of reality, but to make it more tolerable.


Choosing Magic with Gratitude • 8" x 8" watercolor
Posted by claudiadiller at 5:02 AM No comments: 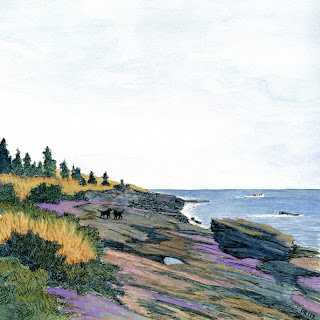