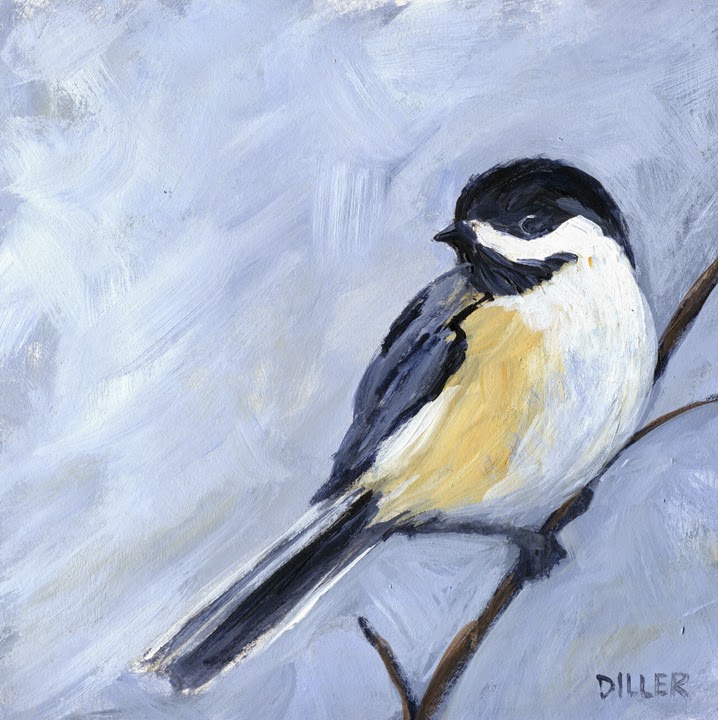 I don't know why I needed to paint a Black-capped chickadee. Maybe it was to satisfy a craving to see one of these adorable little featherballs flitting around out there on my walk through town today. They always make me smile - they are the friendliest birds, don't you think? But alas, it was too cold. If I was a chickadee I'd be hunkered in somewhere too.

I was hoping my new year painting might contain a profound and positive message for the upcoming rollover into 2015. As it turns out, and quite by accident, chickadees were a good idea. Chickadees are viewed very positively in many Native American cultures.

In Cherokee mythology Chickadee is associated with truth and knowledge, and the arrival of a chickadee is thought to warn of danger or foretell the future. It is also considered to be the bird of truth expressed in a manner that heals, balances and opens perceptions in a way that adds joy to everyone’s lives.


Chickadee is associated with the thinking process, higher mind and higher perceptions. It is also associated with mystery and the feminine, and uncovering the mysteries of the mind.
In many tribes, chickadees are symbols of success, and it is considered good luck to see or hear one, particularly in a dream or vision.

So, I hope you always tell the truth in a constructive way, and are blessed with some Chickadee success and luck in the new year.


For those who don't know their state bird, here are some Black-capped Chickadee fun facts:

• The Black-capped Chickadee is the state bird of both Maine and Massachusetts. It is also the provincial bird of New Brunswick.

•  A group of chickadees can be called a banditry of chickadees. This collective noun probably refers to the mask-like appearance of chickadee species.

• The chickadee may be one of several animals with names borrowed from Native American languages. The Cherokee Indian name for this bird, "tsigili'i" (also spelled tsikili, jigilii, jigalili, or many other ways) was recorded in Cherokee texts well before the English word "chickadee" was (the chickadee did not have its own English name before the 1800's, being referred to by the more general name "titmouse.") Nobody knows for sure whether the English word "chickadee" was borrowed from "tsigili'i," or whether the two names were completely independent attempts to mimic the bird's call.

• Another take on the name is because of their alarm call. This type of name is onomatopoetic — the word is the sound that it describes. The more “dee” notes at the end of a chickadee call indicate increasing levels of agitation. For instance, a chickadee may end their call with just one “dee” when a known person fills a favorite bird feeder. An owl roosting near the feeding station would warrant many more “dee” notes.

This is what the call of the Black-capped Chickadee sounds like, though I think it changes with the season:

•  While some species may move seasonally, for the most part chickadees are non-migratory. Passing migrant species may seek out feeding flocks of chickadees (finding their “chick-a-dee” call familiar) as they stop along their migration route.

• Chickadees are known to store food items like seeds or insect larvae in times of abundance. The cached food may be retrieved in leaner times.

• Chickadees are cavity nesters. They use old woodpecker holes or excavate their own cavities in rotted or soft wood. They will also use birdhouses.
• The range of Black-capped Chickadees overlaps with that of Carolina Chickadees. They look so much alike that even the birds themselves may have a hard time telling each other apart – they hybridize! Offspring of a mixed pair sing a song that is three notes long. That’s one less note than the Carolina parent, and one more note than the Black-capped parent!

• There are five species of chickadee in North American: 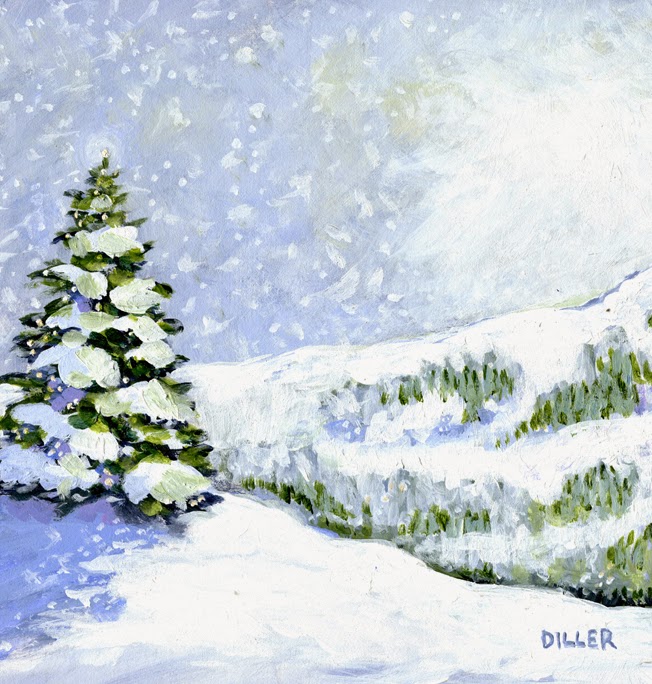 I love Christmas morning. There's a spark of hope that maybe today all of the world will yearn for peace of mind above all else. This is my wish for all of our children.

SOLD - It Must be Nearing Christmas Eve. The Deer Are Jumping and Leaping About 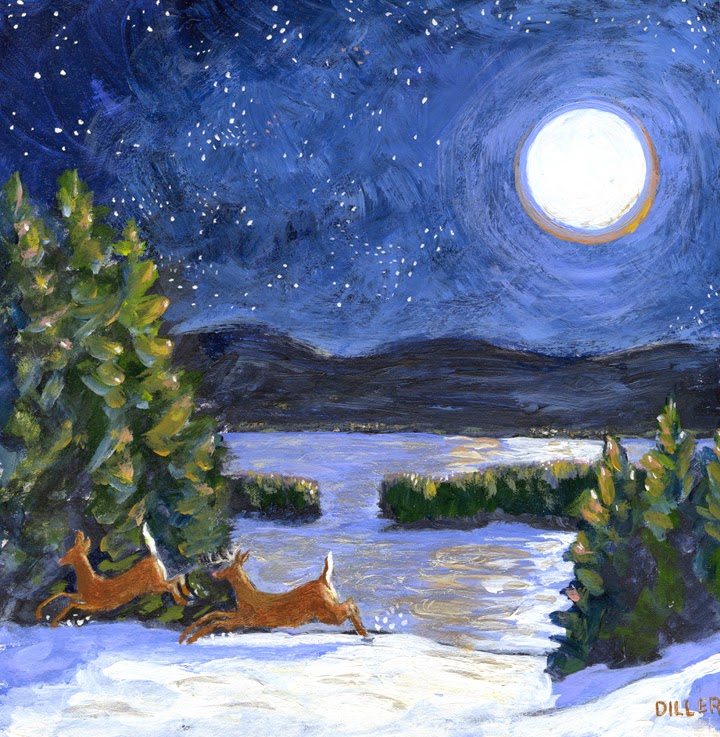 The deer herd in our neighborhood has been bulking up all fall on the cedar wind wall we planted two years ago along the border of our property. The entire bottom half of the trees are gone again. The poor things look like bobble heads.

But it is, after all, that time of the year when the local white-tailed deer population here in Maine, inspired by their flying reindeer kin, begin an annual holiday rite of gleefully jumping and leaping through the air all night long and in to the wee hours of morning for five days before Christmas Eve. This requires an enormous amount of energy, and we have, this year again,  proudly done our part.

For those of you who think this and flying reindeer is all a bunch of bunk, loose your hairy ears and noses for a minute and check this out. There's now proof that Rudolf does indeed have a red nose to guide Santa's sleigh on Christmas Eve. If you don't believe it, the link below should put all doubts to rest: 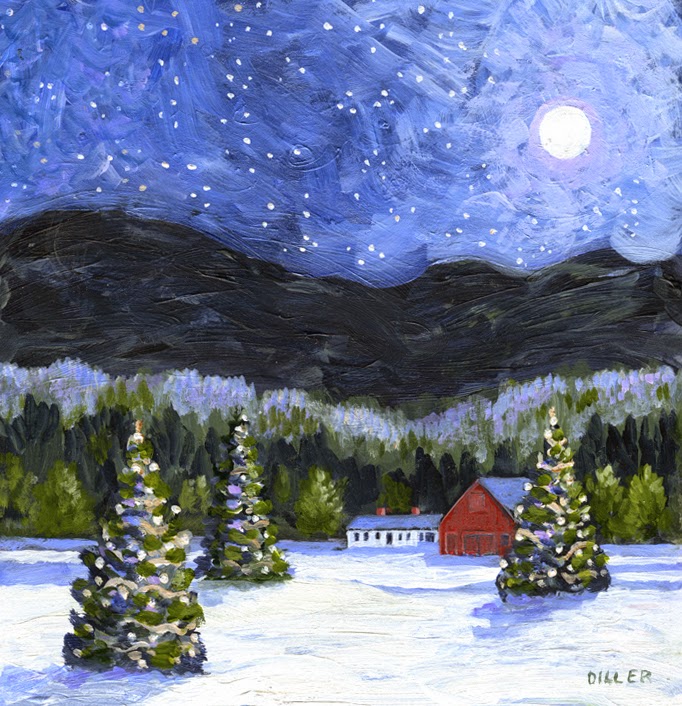 For those who doubt that the winter landscape in Maine is enchanting, believe me when I say it's true, especially around the holidays when we allow our imaginations to go. 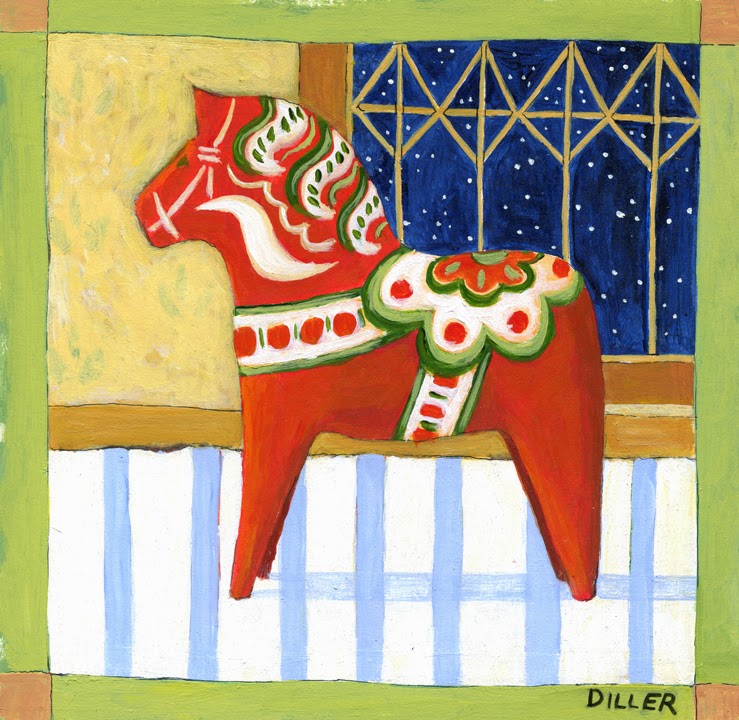 We artists are lucky. If we want to get into the holiday spirit, we paint it. I love dala* horses - they remind me of the more cheerful aspects of the winter holidays. I have one I keep out year round.

I also go shopping - I've been programmed to. The decorations can be pretty interesting, from an artistic point of view, and okay, maybe I get a little cynical now and then. But what I really like is that the sales people have to be nice to me. Normally they take one look at me a run the other way.

*For those of you who do not know what the dala horses are, here's a great link:

Posted by claudiadiller at 8:23 AM No comments: 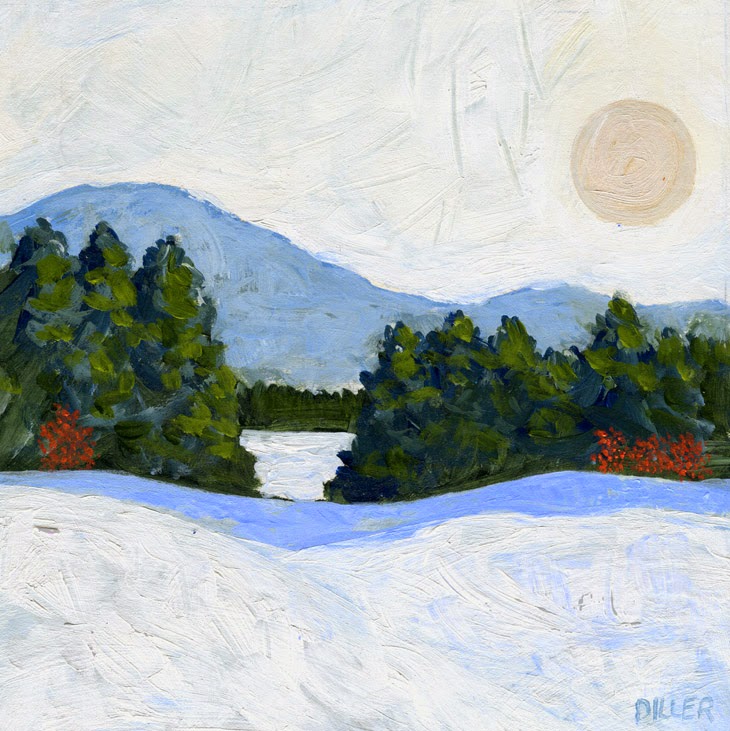 I felt the need to paint something holidayish. When I can finally take a moment to ponder the holidays, I usually see winterberries. They're a pleasant respite from the overwhelming economics of the season.

They seem to be more abundant to me this year. I saw some bushes last week that knocked my socks off.  Maybe they're trying to tell us something like, it's time to take a serious jump into merry.