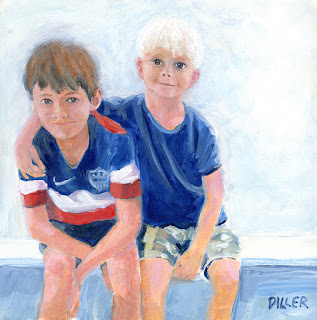 I spent an afternoon last week messing around with a sketch of my two grandsons. They live clear across the country in Seattle.

I've used these two quite liberally in a few of my paintings over the years, and while this is not a very good representation, it was nevertheless great fun, and almost like having them right here in Maine. They are after all, my best little buddies, who also happen to be best buddies.

Posted by claudiadiller at 5:52 AM No comments: 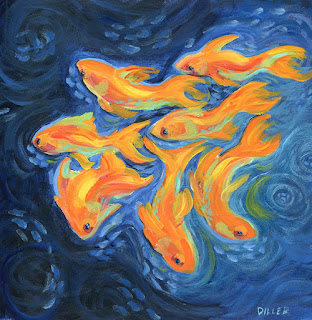 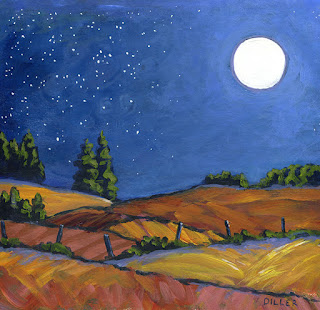 A stargazer by nature, I spent an inordinate amount of time in my youth during the month of October scanning the skies for witches and flying monkeys. I was terrified, thanks to the Wizard of Oz movie we all dared each other to watch every year on TV.

These days, when the moon is full out in the countryside, I look for Eliot and E.T., the result of many years of therapy. 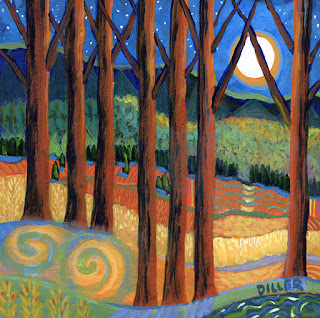 The big fall rollout has begun. Up in the western mountains it is well underway.

I find this time of year fascinating. There's an element of something otherworldly at work out there as the countryside begins to morph. It might have something to do with the hazards of shrinking daylight hours - like getting caught in the dark on an evening walk. We forget that a giant twisted fallen limb up ahead on the side of the road is just that, and that the rustling of those little leaf tornadoes are simply a dying daytime breeze. There are no giant hissing lizards in Maine, we assure ourselves.