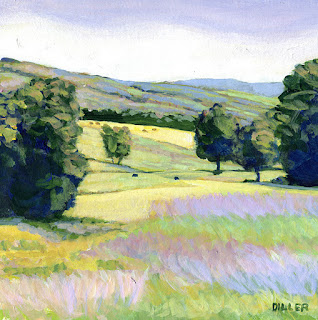 I keep thinking I'm going to switch gears and move in to other subject matter. My intention was to do that this week, but then I encountered this view. You stop your car, and sit there saying to yourself, how can anyone make something like this up?

It was an overcast day driving back from the movies and an adrenalin pumping session with Jurassic World. We took an alternative route back to Kingfield over some back roads and up along a lazy ridge. I looked out and saw this, and exhaled a directive to stop the car. Being a Taurus, I could have sat there all day.


Posted by claudiadiller at 8:12 AM No comments: 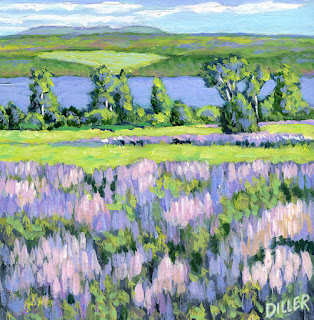 We've been sailing the Claudia on the lakes up in the western mountains while the Claudia II is being repaired on the coast. It's been fun. We trailered to Flagstaff last Sunday, and Rangeley this past.

On the way back to Kingfield from Rangeley, we noticed a plethora of lupines alongside Route 16. There's one famous field just outside of town overlooking Haley Pond with Saddleback Mountain in the background. I've done a quick sketch of it - figured we all needed a splash of color on this foggy Maine morning.

It appears as if someone has spent their lifetime spreading lupine seeds hither and yon, and it's finally all come together like one big thwack on the landscape. I don't remember seeing so many lupine, there's just no way to describe how beautiful they are right now. And I certainly have not done it justice here. You really need to get up there and check it out for yourselves.

Posted by claudiadiller at 7:29 AM No comments: 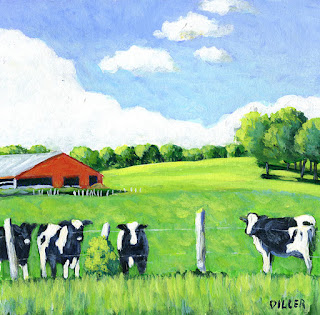 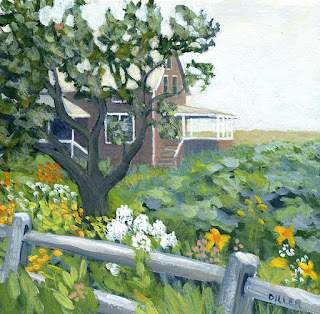 One rainy day a few years ago, we limped into Christmas Cove through a pea soup fog looking to have some lunch and stretch our legs. The Claudia - our first little sailboat, and a real Tom Sawyer Huck Finn boat, was not a great vessel for bad weather.

Twenty one feet long and open (no cabin), she was fun to sail because we could maneuver through shallow water. We sailed her for ten years all around Penobscott Bay. We built a platform for sleeping on after a couple of years of sleeping on the hull, and a tent out of nylon, mosquito netting and 1/2" plumbers pipe that I had made, which was great unless we had a downpour. It was like sleeping on a raft - we were only about eight inches above the water.

After lunch aboard under our little dodger, we tied the Claudia to the public dock and meandered down this road and that looking at real estate. Most of the places are old and traditional out there with a few huge exceptions. It's the kind of area magazine and TV ads tell you to expect to see on the Maine coast.

I liked this place because it was still pretty Maine-looking. It was the kind of place I would have liked to have curled up in next to a wood stove with my blankie, and a good old fashioned murder mystery. Kind of like today.