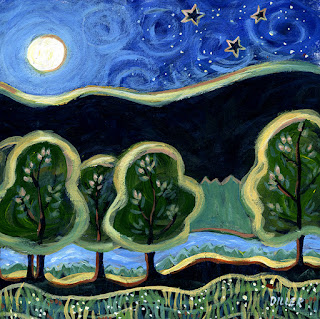 Posted by claudiadiller at 7:24 AM No comments: 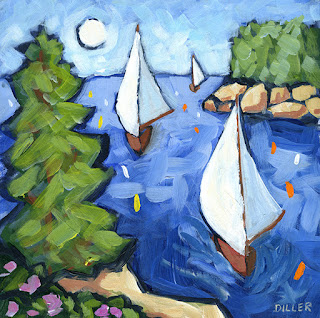 
ONE DEAD RUN AT A TIME
Sailing with the wind square to your stern is called a dead run. If you have a main and a jib, you can sail wing on wing. The jib flies to one side of the mast, the main to the other. You are pushed across the water like a butterfly. It's lovely.

Decades ago, I took a friend out for a spin on a borrowed Laser. For those who don't know, a Laser is a small but feisty single-handed racing boat with a very tall mast and way too much sail for it's size. As a result, it's very "touchy," with a response time of 0 seconds. I had single-handed a sailfish a couple of times in my career and figured, heck, all little boats are alike - I could handle this one. My friend had no prior sailing experience, but like me, she was gung-ho for a new adventure. No worries, we said, we have life jackets, the sun is shining and the water temp is delightful.

There was a brisk breeze tacking off the dock close-hauled upwind. I was feeling really special - like I really knew what I was doing. We were going fast and loving it because honestly, we were speed freaks having accumulated a legendary number of speeding tickets between us in our day. What a blast we were having.

And then it was time to go back downwind, or jibe-ho as they say. For me it meant spinning the boat around 180 degrees into a dead run. The first jibe resulted in an immediate sail slap to the water. The boat went over so fast, we flew through the air and into the water before we could yell fore! Choked with laughter, we righted the Laser and jumped back into the saddle and took off again. As I started to haul the sail back in, the mast immediately pitched from the left to the right and back again. My friend brilliantly ducked the lightning fast and deadly pendulum that was our boom, eventually pinning herself tight to the deck. But we were in the drink again before we knew it.

It was dramatic. I'm thinking seven, but hoping it was only five times we rolled over trying to get underway. We were like a death roll wind-up toy, and my friend now had justifiable reason to finally ask me if I knew what the hell I was doing. I don't remember what my reply was, but I think I lied hoping it would somehow morph true.

By the grace of God, and I'm not kidding here, we eventually got the hang of it. We both figured out how to throw our weight around - hiking in nautical terms, and were to win the race against impending death when we finally bow-butted our home dock. It was freakin' awesome! we decided over a cold one later, and over several more later on. We scared the shit out ourselves, were exhausted but on an adrenaline high, defined ourselves as Olympic contenders on perseverance and raw guts alone, had a great swim, got some color, and survived!

We never sailed together again - both determining that I needed to hone my technique. She and her husband eventually bought a sailboat, which shocked the hell out of me, so I didn't have to feel guilty about destroying her aspirations. Me, I continued to test my fear of death rolls for many years. I still freak sailing a dead run, but not so much that I feel like it's still a game of high seas chicken - like who's going to take a dunking first, me or the boat. You just gotta hang in there and take one dead run at a time. 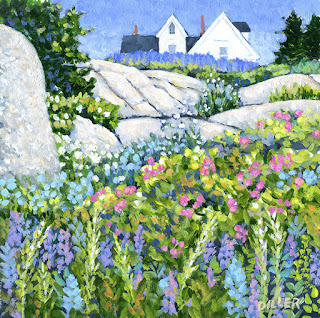 Ever round a corner while on a walk and bump into something that makes you stop for minute? I found this stop in Stonington one day. It's the work of mother nature, but she doesn't own the property, so I tried to be a little discreet while snapping away.  I often wonder, do owners of these roadside patches look out their windows and ask themselves, how am I suddenly a participant in an unannounced free-and-open-to-the-public-gardengeek-tour? Do they take pride in their work and like showing it off, or do they consider fencing us nosy gardengeeks out? Hopefully they generously recognize it's part of the deal when they snap up prime-location property in Maine's most popular tourista communities. 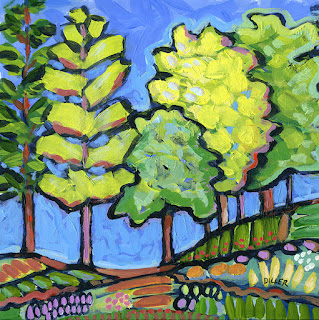 Trees. They're really quite astounding. I’ve just started reading a book called Lab Girl. It’s good, and a great way to escape to another universe for an hour or so.

Trees are important. They give us oxygen and store carbon. They provide shelter for wildlife and humans, and stabilize the soil. At one point, a third of our planet’s land was covered with trees. Today there are eighty billion trees in the protected forests of the western US. The ratio of trees to humans is well over 200. In the last ten years we’ve chopped down around fifty billion of them - and there will not be trees re-planted. Every ten years we humans cut down one percent of those forests.

I'm gong to take a walk to appreciate trees tonight, and pray we figure out how to curb our appetite for them.