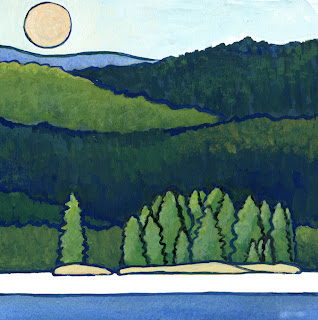 I saw this passing through Belgrade one afternoon a while ago, did a quick study and never got around to posting it. It was a beautiful sight - the last of the ice shelf on the lake against the dark greens.

And though it's a stretch, Maine is currently sandwiched between a cool breeze coming down through the mountains and across the foothills, and a sometimes biting sea breeze, so technically we could be feeling like there is still ice on the lake. 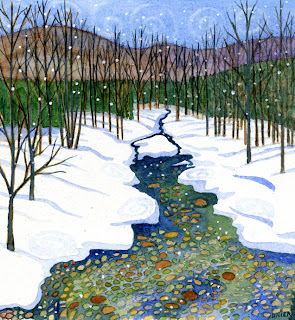 This will be the last snow scene I paint until winter. Believe it or not, I actually saw this a week ago heading south on Route 27 from Sugarloaf. Today things look a lot different - the snow is gone for the most part in the foothills, but there are still pockets here and there in the woods. Sugarloaf still has a lot of snow and plans to stay open until May 1. It's still winter up there. 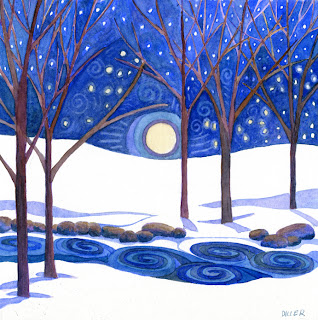 The Crows are Crowing 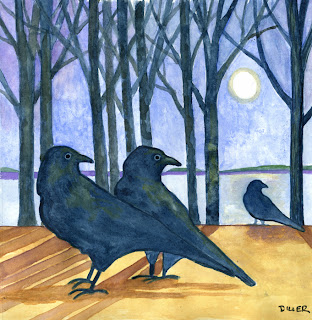 So....it's that time of year again. The sounds out there in birdland are seriously amplified while they look for mates and I begin to open my window a little bit more.  I wear ear plugs now so it's not as bad as it used to be, but even with ear plugs the crows are coming in loud and clear. I must have done something weird in a past life to have been saddled with the likes of them.

I've written quite a bit about crows - they are a favorite subject of mine - so finding something new and amusing was going to be difficult until I found this. Wish I had been there - it was a real happening in my opinion. 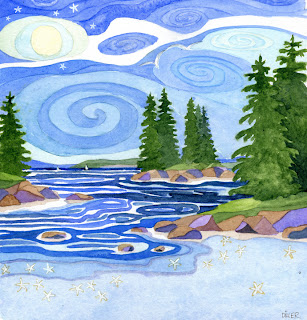 I was thinking about summer on this glorious summery day here in Maine - hitting 60 in Portland. The first thing that came to mind on my car ride back to Portland from Kingfield (where I had planted my peas, radishes, lettuce, chard and spinach), was starfish. Who the hell knows why. And then it occurred to me that I know nothing about them.

It always amazes me how little I know considering how old I am. I was always a curious child, but who had time to go to the library to get relevant information about anything? Maybe I gave up. In the meantime, the internet has opened up the world to me. Here's what I found out on a brief search and find:

Starfish are also referred to as sea stars, and although they live underwater, are not fish. I will therefore call them sea stars from now on. The same thing happened to me with sea gulls. I found out we are not supposed to be calling gulls sea gulls. The proper name is gulls.

Sea stars use hundreds of tiny tube feet on their undersides to help them move along and are related to sand dollars, sea urchins, and sea cucumbers.

Their bodies have five sections arranged around a central disk. Although most sea stars have five arms, some have up to 40. There are about 2,000 species of sea stars.

Sea stars can regenerate lost arms. They house most of their vital organs in their arms, so some can even regenerate an entirely new sea star from just one arm and a portion of the star's central disc. It takes about a year for it to grow back.

Sea stars have a tough covering on their upper side, which is made up of plates of calcium carbonate with tiny spines on their surface. A sea star's spines are used for protection from predators, which include birds, fish and sea otters.

Instead of blood, sea stars have a water vascular system, in which the sea star pumps sea water through its sieve plate into its tube feet to extend them. Muscles within the tube feet retract them.

A sea star's mouth is on its underside. They prey on bivalves like mussels and clams, as well as small fish, snails, and barnacles. They wrap their arms around the animal's shell and pull it open just enough to push its stomach through its mouth and into the bivalve's shell. It then digests the animal and slides its stomach back into its own body.


Sea stars have an eye spot at the end of each arm. This is a very simple eye that looks like a red spot. The eye doesn't see much detail, but can sense light and dark.

So there you have it, some very cool stuff about sea stars. But perhaps the coolest thing was the first cool thing I found out. That they are actually called sea stars. How cool is that.