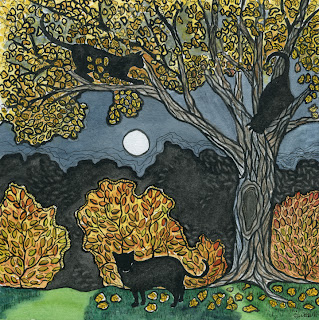 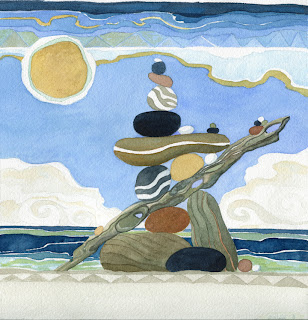 The word cairn comes from the Irish carn (plural cairn) or Scottish Gaelic càrn (plural càirn).
I encountered my first cairn hiking in Maine - I had never hiked until I came to Maine. For a couple of summers as a teenager, the only hiking I ever did was with a gang of Maine townies once a summer. The first summer we hiked Mt. Washington. I had never seen a mountain that big in person. The hike up and torturous stumble down just about killed me. But it was also a stunningly rude awakening to a whole new way of being I would eventually come to love.

Much, much later and as part of my get-mentally-and-emotionally-healthy-or-die phase, my therapist at the time informed me that I was a workaholic, among other things. Workaholic was the only ic I could relate to. All of the other ics were over my level of understanding at the time. All I know is I was working 24/7and loving it.

So what's wrong with that, I asked regarding working 24/7. I love it!
She asked me if I remembered my children's birthdays.
She had me there.

As part of the the exercise I had to make a list of stuff I loved to do.

I can't think of anything, I said.
Fake it, she replied.

So that night I made a list of stuff I was faking I liked to do. The only one I remember on my list is hiking because that's what I started doing. It didn't cost anything and I lived in Carrabassett Valley - hello - the hiking capital of Maine.

I spent a long time just hiking around the valley by myself. I didn't scale anything, I was just trying to get a feel for it. I hiked along through the woods and periodically asked myself, do I like this? I remember not being able to answer that question for a very long time. So I just pretended I liked it. I did however like the cairns I'd find along the trails. I liked adding my two cents worth and building some of my own.

I eventually got into seriously good shape, started running more - every day, did a 10k, scaled the Bigelow Range - my ultimate personal goal, and then hooked up with a bunch of other women hikers. As a group we hiked everything we could whenever we could.  It all culminated at Katahdin. For two years in a row we did Katahdin. It was incredible and the cairns up there were very cool.

I ended up hiking constantly for many years everywhere I traveled -  built cairns wherever I went - but gave it up when I moved to Portland. Maybe someday I'll get back into it, but for now I'll do a day hike with my brother when I go to California or with my kids when I go to Seattle. But that's it.

These days I hike along the beach and build rock cairns there.

Peace is an Inside Job 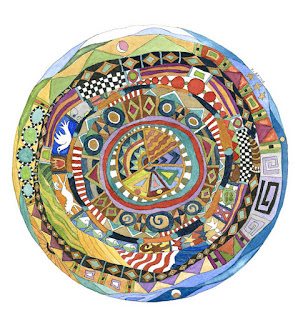 I figured it was time to do another meditation for peace. I occasionally forget what peace is, and it would appear the world is forgetting too.

I try to find things I like to do because if I love what I am doing, I'm creating good energy. We all know energy is constantly expanding, spreading out - the Theories of General and Special Relativity - so it's really important for me to be in a good place as much of the time as is possible.

There are lots of ways to find inner peace. I have found painting these mandalas to be a great exercise for me. 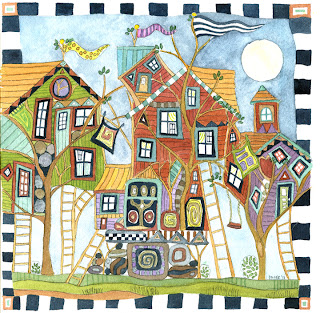 If somebody asked me
to live in a tree
and it was environmentally
okay,
I would absolutely
move in one today.
But since it's not
I'll pretend instead
and then pick a spot
to plant a tree
so one day
there be many.
In memory of Wangari Maathai and the Green Belt Movement
http://www.greenbeltmovement.org/w.php?id=59
Just Pretend • 8" x 8" framed to 12" x 12" • $200
Posted by claudiadiller at 11:05 AM No comments: