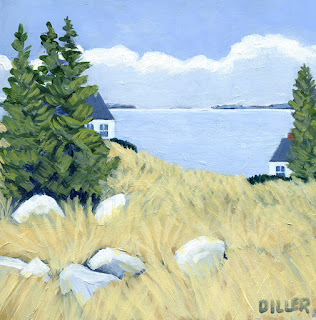 In spite of the mini skyscrapers lining the roadways, Maine is suddenly feeling like spring. But we who know better, know better than to get all giddy. We've been fooled before. We've  all witnessed  March barrel out of the heavens like a howling other-worldly avalanche.

So, for those of you who don't understand this to be what it really is - a brief mental respite from our deep winter drift, I offer this landscape. It's an alternative to what is really out there. Please don't believe it. 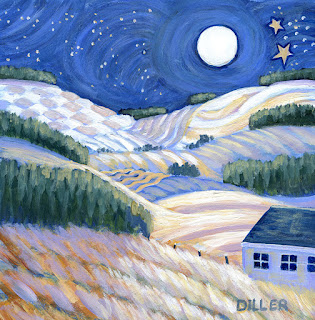 I live with a marketing guy who believes Valentine's Day is one of Hallmark's greatest cons. I know other people feel the same way, so I'm really not singling out a man who I know loves me dearly, but shows it by leading me down hair-raising ski trails instead.

As it turns out, the 'ole boy wasn't far from the truth. It would appear that it all started when ancient Roman men celebrated the feast of Lupercalia from Feb. 13 to 15 when they sacrificed goats and a dogs, and then as a finale, whipped their women with the hides of the animals they had just slain. The men were drunk and naked of course, and the young women would line up to be hit believing (remember blue balls girls) the ritual made them fertile. Later that night there was a matchmaking lottery where young men drew the names of women from a jar. The couples would then hang for the duration of the festival and if the amour was exceptional, it was considered, perhaps, a match for life.

Later in the 5th century, Pope Gelasius I combined St. Valentine's Day with Lupercalia to put a lid on  the pagan ritual. Around the same time, the Normans celebrated Galatin's Day. Galatin meant "lover of women" which was likely confused with St. Valentine's Day at some point in part because they sound alike.

Some years later, Chaucer and Shakespeare romanticized the day, and handmade paper cards became the token of the day.

The industrial revolution in the New World led the way to factory-made cards and in 1913, Hallmark Cards of Kansas City, Mo., began mass producing them.

So, for those who believe, Happy Valentine's Day. For the rest of us, and Valentine's Day aside, enjoy the full winter moon chaos. Hang in there,  be the blizzard, and know that it will all settle down eventually as it always does and be even more stunningly beautiful.

#287 The Simple Fabric Beneath the Superfluous Detail 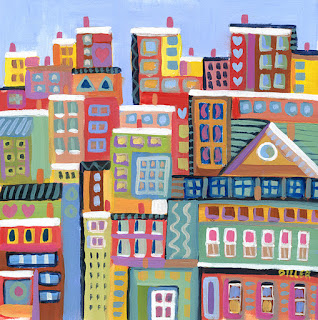 I force myself to take a walk around the neighborhood every morning without my much needed glasses on. The exercise not only wakes me up, navigating sans glasses keeps me alert and anti-depresses my eyeballs with natural light. Plus I can pretend I'm on another planet - which is pretty easy to do because I am so nearsighted it truly does look like another planet.

What I do see without my glasses however, is a glimpse of a remarkable place made up of an infinite number of shapes and colors. It's a reminder of why it's important, when I do have my glasses on, to acknowledge the simple fabric beneath the superfluous detail.