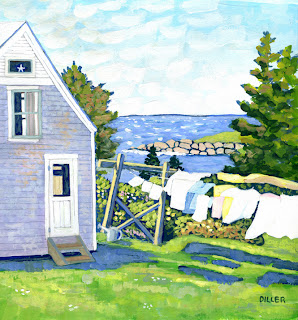 We've had some seriously windy days here in Maine. The folks in Kingfield haven't had electricity since yesterday - trees are down everywhere on our road. It was windy here in Portland too, but doesn't seem it was as bad as it was up there.

It was cold too. Having officially left the period we call Indian Summer, wind rose to the occasion like a barrage of a billion prickly little icicles that impale themselves on anything left exposed. I fought back with a memory of a similarly windy day in the middle of summer on Monhegan Island a few years back.

On this particular day we welcomed the wind. The heat that week had left most life forms on the island feeling pretty limp. Those soft refreshing gusts off the ocean caressed us like a big slow and lazy undulating fan. I was fascinated by some laundry flapping on lines strung out from the wash house just down the hill from where I was sitting. The fluttering reminded me of an *eclipse of moths stuck in a glass jar. It was mezmerizing.

*I started off with a flock of moths, but figured I'd better look it up. Glad I did.
Posted by claudiadiller at 5:01 AM No comments: 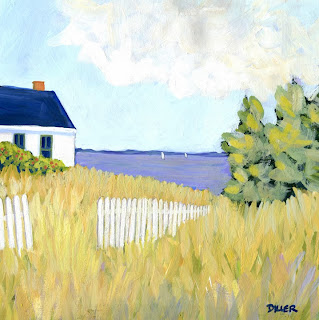 Posted by claudiadiller at 11:38 AM 2 comments: 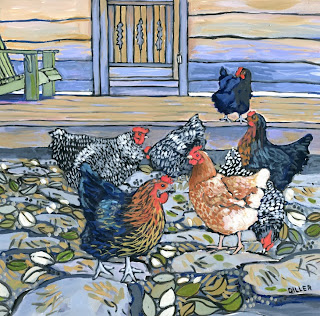 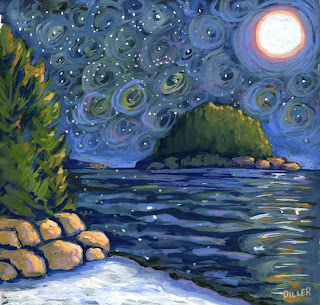 I've been reading poetry these days - Longfellow's Song of Hiawatha, some stuff by Emily Dickinson, etc. And then I discovered Billy Collins.  Garrison Keillor turned me on to Collins who was our  Poet Laureate from 2001 - 2003, and who sat in for Keillor while he was on a road tour this past summer. I love this guy!

I painted this and went looking for a good moon poem to accompany it. I needed a break from my own ramblings. I hope you enjoy this one as much as I do.
Moon

The moon is full tonight
an illustration for sheet music,
an image in Matthew Arnold
glimmering on the English Channel,
or a ghost over a smoldering battlefield
in one of the history plays.

It's as full as it was
in that poem by Coleridge
where he carries his year-old son
into the orchard behind the cottage
and turns the baby's face to the sky
to see for the first time
the earth's bright companion,
something amazing to make his crying seem small.

And if you wanted to follow this example,
tonight would be the night
to carry some tiny creature outside
and introduce him to the moon.

And if your house has no child,
you can always gather into your arms
the sleeping infant of yourself,
as I have done tonight,
and carry him outdoors,
all limp in his tattered blanket,
making sure to steady his lolling head
with the palm of your hand.

And while the wind ruffles the pear trees
in the corner of the orchard
and dark roses wave against a stone wall,
you can turn him on your shoulder
and walk in circles on the lawn
drunk with the light.
You can lift him up into the sky,
your eyes nearly as wide as his,
as the moon climbs high into the night.

Posted by claudiadiller at 11:38 AM No comments: