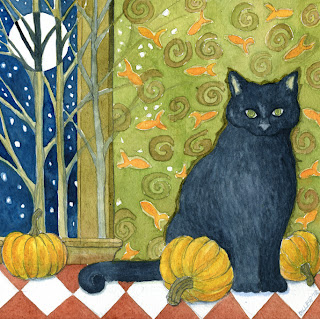 A Wish For a Peaceful Night 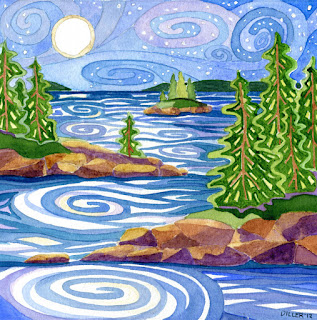 It would appear that Maine's tango with this Category 1 Sandy was less dramatic than it was for millions south of us. The sun was out earlier, and the winds have subsided a lot. We didn't loose electricity up here on the Hill, but our building sure swayed and shook for a while last night. I've been in our little, open, not self-bailing sailboat with winds gusting to 20-25. It's damn scary. On land 25-30 mph sustained, as it was yesterday, is not as bad unless you're dodging flying tree debris, which I was getting home last night. But, the thought of a 60mph sustained wind, or worse a 150 is beyond my comprehension.

The sensation I thought to be the weirdest was in the shower. I kept feeling like my body was, well actually, doing a tango, while my brain knew we weren't. Very strange. The toilet bowl water sloshed a bit too. That was more interesting - sort of like watching a micro ocean.

I hope all of those who have been effected by Sandy will get back to normal asap. This painting is a wish out to them for a much needed peaceful night.

The Infinity that is The Mountains 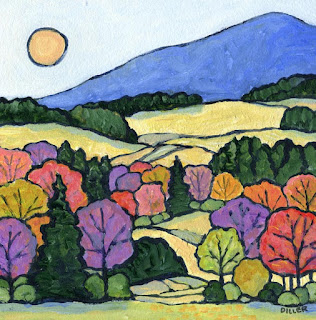 I won't ever stop making my way up to Maine's western mountains during the foliage show. Like that seven minute butt break excuse to sit and do nothing, I go as an excuse to be in awe for a while.

It also reminds me of how I could have lived away from the coast for so long. When I look up at those mountains I see infinity just the way I did when I looked out over the ocean as a kid. There's something about the concept of infinity that comforts me. Maybe it's because I know that as long as I can see infinity, I can see a way to blast off whenever I want to. It's also the mystical aspect - that there are still things out there we just can't grasp.

These days I am practicing how to feel infinity. I can feel it if I sit still, close my eyes and go into the universe that is my body. Some sources say there are over 50 trillion cells in my body. Others think there is closer to 100 trillion. In either case - it's infinity as far as I'm concerned. I practice this just in case I'm in a situation where I can't see it out there. 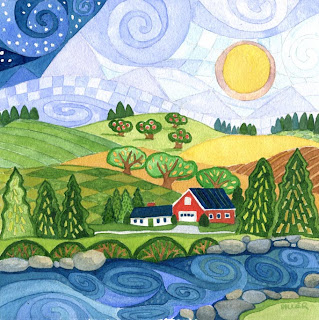 Once in a while I wax nostalgic for the way I see Maine in my mind. I'm still stuck on the farms I saw when I first came to Maine as a teenager one summer over 45 years ago. There was a farm stand my mother used to stop by almost daily to get fresh produce. I'd never seen anything like it before - we always got our veggies at the grocery store. I was struck with the romance of it all.  How special it was to be able to grow your own food - anybody could do it. Why didn't everybody do it I wondered? Of course I'd forget it all when I returned to Connecticut - glad to be back with my friends and the social life that was high school.

Since then I have had a garden whenever it could be worked out. I am still in awe of it all. I can't think of anything more incredible than picking my own veggie and eating it right there on the spot. Maybe it's the idea that the foot long carrot I am eating comes from a seed the size of a pin head.  Amazingly, these little seeds don't eat like we humans do. They just absorb whatever they can from the dirt they are planted in. If you have the same notion and look at a handful of dirt at the same time, you too might think it's a freakin miracle. 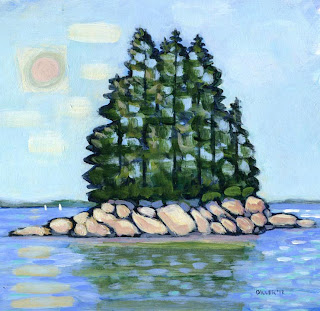 There's nothing in the world quite like an island in Maine. We pass all kinds when we sail. There are the crumbled shell and sand beaches that disappear at high tide, larger rounded outcroppings worn smooth by trillions of years of pounding waves and tide, and tree covered islands that always astound me when I think about how all of that greenery is the result of the determination of one little pine cone!

Maine's undulating, zigzagging shoreline is 3,478 miles long with close to 3000 islands offshore. Take your pick and be in awe. This one was in The Reach off North Haven.