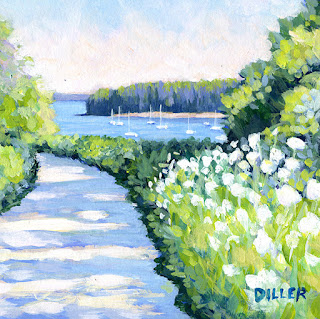 For the past two years, we've sailed to Bucks Harbor as a first or second stop on extended cruises down east. Buck's Harbor is a narrow swath cut in to the coast line leaving a heart-shaped chunk floating in the middle. It's at the beginning of a delightful reach (hopefully), with the tide, down Eggemoggin Reach. But you never know.

We took our kids to Buck's Haror many years ago, and with book in hand, traipsed up to Condon's Garage featured in McCloskey's quintessential story, One Morning in Maine. If I was on the marketing committee for Buck's Harbor, I would have tried to preserve that place, but alas, it is no longer. On our morning walk we found a high-priced restaurant, a yuppyish general store/cafe, and a meditation retreat. I think there was a gallery there too.

I did a quick sketch of the road back down to the harbor, and the yacht service float where we had purchased our mooring the night before. The road was lined with Queen Anne's Lace - very pretty in the morning light. When we got there, the nice kids at the dock were dealing with an irate woman. She had a loud, distinctive southern accent, and was evidently confused as to why the yacht services provided in the past for free were no longer free. It took her about 20 minutes to run out of hot air.  We were trying to buy an ice cream sandwich, but were kind of enjoying the show, sad to say. The kids handled her a lot better than I, or Donald Condon for that matter, would have, that's for sure.

I found this story about the closing of Condon's and the good ol' days on the internet. Thought all you One Morning in Maine fans might enjoy it.

Closing the book on Condon’s; Garage made famous in McCloskey tale still lives for generations of readers - By RICH HEWITT, BDN Staff Writer, 2007

One morning in Maine not so long ago, Donald Condon woke up and did not drive the few miles from his home to Buck Harbor and the garage where he has worked steady for the past two decades.

Condon closed the garage in May and moved the business to his home on Herrick Road. The closing of any established business in a small town is remarkable; this one, more so.

Though an ordinary garage, it is extraordinary, for this is Condon’s Garage in South Brooksville, the iconic small-town Maine garage immortalized for generations of readers by writer Robert McCloskey in his children’s classic, “One Morning in Maine.”

Though the action at the garage covers only a few pages of the story, Condon’s Garage and the building across the street “where Mr. Condon’s brother kept store” have enchanted young and old alike, many of whom have been drawn to the quiet coastal village just to see the buildings, meet the people who worked there and have an ice cream cone, as the two sisters Sal and Jane did in the book.
“Over the years we’d get probably 10 or 20 people a year coming in and wanting somebody to sign their book,” Donald said.

And, although he and his second cousin Phil, the son of the Mr. Condon in the book, would try to push that task off on anybody they could, they never really minded the visitors.
“All those people were genuine,” he said. “They seemed amazed that they could read something in a children’s book and then get to actually see the real thing. Mr. McCloskey did a nice job with the book. He used some poetic license, but not much.”

In recent years, he said, they started handing out used spark plugs to the people who came in, an echo from the book in which Sal makes a wish for her little sister Jane on the used spark plug that Mr. Condon had removed from her father’s outboard motor.

“They’d go off happy with that,” he said.

The building is silent. Outside, it is not much changed from the picture McCloskey drew in his book, which was first published in 1952.

The road, paved now, still leads up from the harbor and the gas pumps still stand outside. The white clapboard front remains inviting, but the double doors are closed and inside it is dark.

The sign proclaiming “Condon’s Garage,” which had hung over the business, has been taken down and sits in a corner inside. Old receipts, gas and oil cans, old rags and toolboxes abound on the counters and floors; saws and gaskets hang from nails and old parts and outboard motors sit on stands or benches as if waiting for someone to work on them.

But it already feels empty. At some point, Condon said, he probably will put the building up for sale. For the latest generation of Condons, it was time to move on.

“Phil was getting out of it, and I thought I might downsize a bit,” Donald Condon said recently.
It was a practical decision. The building, with just a wood stove, was hard to heat. And it was built too close to the road.

Still, it was a decision that ends a tradition of more than eight decades of Condons running a garage at that site.

The building was built in 1924 by Donald Condon’s great-grandfather for his son, Russ. Originally it was planned for three uses: a garage and store on the main floor, and a movie theater to show silent pictures.

The theater was never used. Talkies came in; silent pictures died out, and small town theaters went with them.

The garage operated steadily until World War II, when it closed for a few years. When the war ended, Phil’s father took it over. His name was John Richard Condon, but everyone called him Dick. He’s the one in the book.

Jane McCloskey, the younger of the two girls depicted in the book and the daughter of author McCloskey, remembers the garage, the store and Mr. Condon, but does not recall the specific trip from their home on Scott Island to South Brooksville recounted in the book. In the story, the outboard motor won’t start, so the father, McCloskey, rowed to Buck Harbor.

“I was pretty young at the time,” she said recently. “We took lots of trips, but I don’t remember my father ever rowing to Buck’s Harbor. We usually went to Little Deer.”

To a young girl, the garage was a little intimidating, McCloskey said.

“It scared me a little,” she said. “It was one of those guy places, lots of grease and lots of metal. And he had a barrel filled with water that he used to test the outboards. He was a nice man – quiet. He used to talk engines to my father.”

McCloskey lives in Deer Isle and only passes by the old garage every few years or so. Still, she said, it is “kind of sad” to see the garage close.

But that is the way of things. The store, Condon’s Store, across the street closed years ago.
McCloskey remembered it as a real general store where you could buy anything from shoes to life jackets, hardware to embroidery thread, along with groceries and, of course, ice cream.

Now a gallery, the store also served as the town’s post office for years, and Emily Webb, who was postmaster then, recalls that the store also drew people even after it closed.

“People would come and ask, ‘Is this the store in the book?’ Webb said. “Mothers would come and sit on the porch and read the book to their children.”

And they still come.

“There was one here yesterday,” said Webb, who now works at the Buck’s Harbor Market around the corner.

Though he doesn’t think the flow of devoted readers will make its way to his new business, Condon said he expects people will keep on coming to see the old garage and store.

“I imagine so. As long as the book is published, I think they’ll still try to look it up,” he said. “There’s been a lot of ice cream cones sold here because of that book.”

Posted by claudiadiller at 12:24 PM