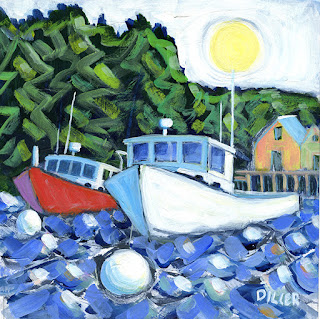 Labor Day is dedicated to the social and economic achievements of American workers. It's a yearly national tribute to the contributions workers have made to the strength, prosperity, and well-being of our country (I paraphrase here).

I have a lobster dinner once a year as part of our annual Sun Seekers International group outing. We do the lobster, steamers, corn and coleslaw, followed by a local ice cream cone. Trying to get the meat out of a cooked lobster is definitely laborious - like you almost have to work for your meal. In fact, one of my favorite past times is watching rookies try to figure out how to get their money's worth.

It begins with perplexed expressions, followed by a joke or two, some poking, pounding, cracking, and peering into. Some can't touch the beast, others request divine intervention, and then there are those who get right in to it and become fully encased in butter and bits of bright red shell. I'm a pro, but still feel like I've accomplished something when I've spent an hour cleaning one out, so I never laugh. I was there once too. You never forget the first bout.

Fishing for lobster is a crap shoot, not to mention laborious and dangerous. So I dedicate this painting to the fishermen who catch the lobster, and to the rookies who labor for their lobster dinner the old fashioned way.