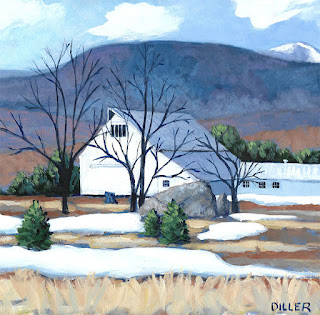 When it finally warmed up for a bit and the clouds allowed the sun some air time, the snow melted as fast as a Popsicle* in mid-August. This year the Easter egg hunt around here was for lost gloves, rakes, chairs, anything green and some sanity. There are probably plenty of treasures up on the mountain too where chairlift lines are veritable graveyards of poles, gloves, hats, goggles and cell phones to name just a few. It's winter's great lost and found, full of surprises.

Unfortunately, the roads and lift lines are also littered with our trash - discarded beer cans and bottles, cigarette butts, coffee cups and nip bottles. Get a grip people.

*The name was trademarked registered by Frank Epperson of Oakland, Calif., presumably from (lolly)pop + (ic)icle. ... Seeing that it was a success, in 1924 Epperson applied for a patent for his “frozen confectionery” which he called “the Epsicle ice pop.” He renamed it Popsicle, allegedly at the insistence of his children.
Posted by claudiadiller at 8:14 AM