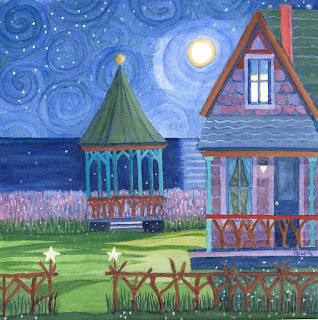 Chasing lightning bugs was an annual event when we kids were growing up in Connecticut. There was a big field beyond our backyard that was loaded with them. I do remember catching a few in my gently cupped hands, which was an art form. Injuring one would be unforgivable. And I never used a jar. They were too magical to be caught and imprisoned.

We used to call them lightning bugs, but I guess they were called fireflies beyond our neighborhood tribe.  We were correct in calling them bugs because they are in fact beetles, not flies, but beyond that,  lightning bug vs firefly depended on where you grew up.

"As meteorological researcher Jason Keeler noted, the areas where people say "lightning bug" seem to overlap with the parts of the country where lightning strikes are particularly frequent."

"In 1949, linguist Hans Kurath found that "firefly" was particularly popular in large cities on the East Coast. Later, the Dictionary of American Regional English found that "lightning bug" was the more common term in the South and Midwest, but not the Pacific coast."