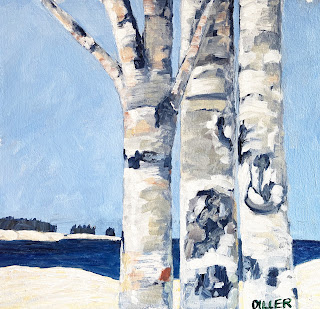 I always thought there was something special about birch trees. I found this piece posted by Nibwaakaa, The Indigenous Women's Ingenuity in the Great Lakes Region. The link is below.

"According to Ojibwe tradition, a spirit-boy named Winabojo once sought shelter from the Thunderbirds in the hollow interior of a birch tree after being chased by them from the birds' nest. The tough bark of the tree protected Winabojo from being attacked by the creatures, and upon emerging from his hiding place, Winabojo declared the birch tree would “forever protect and benefit the human race” with its durable and enduring bark (“Winabojo and the Birch Tree,” 1994). For this reason, birch bark is considered to be a trustworthy material for the creation of many Native American cultural objects, including the piece featured in this virtual exhibit."

Posted by claudiadiller at 1:27 PM