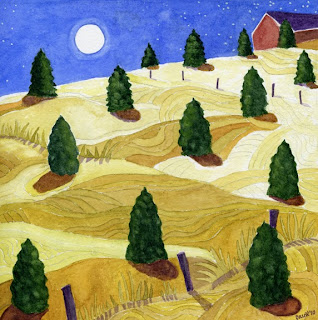 I'm a big fan of Christmas trees. I love the colors, I love the smell, but mostly I love that I can lay down on my back under a tree right in my own home with my head close to the trunk, look up through the branches and pretend I'm the size of my thumb about to go on the climb of a lifetime. It's magical and beautiful and just about as close to being out there in the forest as you can get without being there.

I used to have an internal debate about real trees vs fake trees. I made up my mind years ago after spending one Christmas in Palm Springs, CA with my mother. She's probably about as different from me as you can get. She's a lady. We differ across the board - food, clothing, home decor, hobbies, politics, you name it. There are no two people more different. How she gave birth to me is the subject of great debate in our family. We speculate it could have been a true immaculate conception!
Anyway, her fake tree (much to my horror), was all white with white lights (that did not blink, thankfully), and gold, silver and maroon ornaments. It was perfect and looked elegant in her all white living room with her all white furniture set upon her all white carpeting. There was more white inside her home than there was outside -  a total reversal of winter here in Maine. The grass and foliage on the orange, lemon, grapefruit and palm trees outside were summer green. The surrounding mountains were brown with random spots of green. It was not the type of Christmas I was used to by a long shot - but it was my mother's dream come true.
Having broached the subject of real vs. fake with my mother taught me to keep my mouth shut. For me it was like trying to lead a horse used to drinking champagne, to water. For her it was another reason I could not possibly be her daughter. So for those of you who may still be in flux or worse in an annual debate with your mother, I have attached some info I gleaned from the Nature Conservancy.
Fake trees are usually made from a kind of plastic called polyvinyl chloride (PVC) which is derived from petroleum. Also - According to the Children's Health Environmental Coalition, the manufacture of PVC creates and disperses dioxins, which include the most toxic man-made chemical known. Released into air or water, dioxins enter the food chain, where they accumulate in fatty tissues of animals and humans, a potential risk for causing cancer, damaging immune functions and impairing children's development. YIKES!

Electricity is used to melt the plastic, and approximately 85% of the fake trees sold in the US are shipped here from China. Most of China’s electricity comes from burning coal—the dirtiest source of electricity. Once the fake trees are made, they still have to be shipped across the ocean—usually in a diesel-fuel powered ship. More emissions still. (Fake trees also sometimes release lead when they get old, which isn’t a climate impact, but still is not a great thing to have happening in your living room.)

Posted by claudiadiller at 1:38 PM