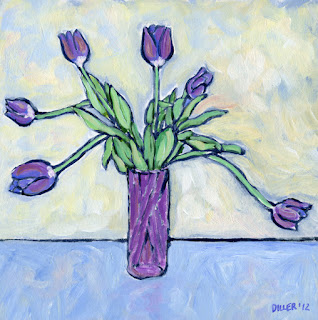 I don't know if I'm using the word morph correctly here, but I've been watching this bouquet of tulips morph for about a week now. They are far from the same tulips I bought a week ago.  I would not expect them to be the same of course, but what's different about this particular bunch is that it's beginning to resemble and act like a daddy long legs. It appears to be on a cleverly disguised and barely perceptible crawl across the kitchen table. What it doesn't realize is that I've been watching!

I don't usually pay much attention to flowers - they're pretty and the colors are stunning at times - but this little bunch of tulips is really beginning to scare me. What if one of these nights the darn thing makes one of those inexplicable biological leaps from flower to beast and realizes it can crawl - sort of like the missing link thing? What if it already knows it can crawl and is just waiting for the proverbial black monolith to land at which point it will prove the urban myth true that spiders clean your mouth out while you sleep?  Woman found dead in her bed apparently having choked in what appears to be an attempt to eat her tulips. Oh for heaven's sake Claudia, get back to work!