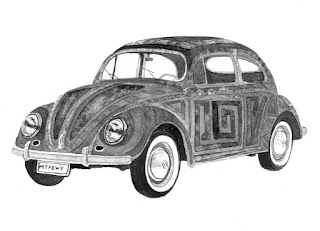 When advertising hype around the Super Bowl begins, I click over to You Tube to see what Volkswagen's up to.  I'm never disappointed. In fact I went on to look at a history of VW's ads. It was fascinating and fun, and two hours later I'm suddenly remembering the deadline I was working on. Naturally I decided to postpone the deadline and paint a Beetle. When The Force moves you, you go with it.  "Do not underestimate the power of The Force," as Vader's states it so well. Anyway, I'm a sucker for Star Wars, Volkswagens and floating around the ethernet - a proverbial trifecta for me and a good reason why I'm generally destitute.

I painted this particular Beetle to be what I imagine Vader would go for if he was in the market for something a little different. It's black, a bit distinctive and a classic. It's very powerful, but stealth in it's power - a major component of the man himself.

Posted by claudiadiller at 6:37 PM