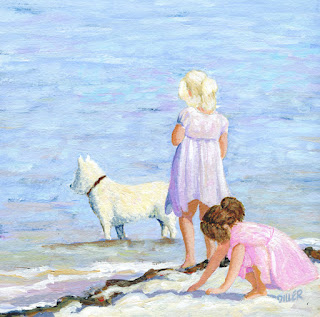 I was strolling the the walkway that wraps around the Eastern Prom and along the East End beach the other day when I caught these girls messing around in the sand. The dog wasn't theirs - it had just paused for a few seconds.  It belonged to an older gentleman who had walked by. It got me thinking about how very special it is having a beach like this so close to all of us city kids  - we can walk to it from anywhere on and over the Hill.

The Prom park and beach reminds me of accounts I've read describing the heat waves that hit NYC in the old pre-air-conditioning-for-the-masses days when thousands of immigrants would escape the stifling lack of air in their apartments and fire escapes and jump into the river to cool off. They would then eat their packed dinners and sleep in the adjoining parks all night. Although we're not legally allowed to sleep in the parks here or anywhere else anymore, we can still have our picnic dinners, and we do up here on the east end.

A neighbor who grew up on the Hill told me the East End beach used to be very polluted. No one swam at the beach, she said, everyone swam in a pool that used to be where the lower parking lot now is. The bathroom facilities that are there now were there then too.

The beach is no longer polluted and the state monitors the water to keep it safe. Earlier this past spring about a dozen divers scoured the floor off the shore of the beach looking for trash. They found glass, plastic, metal, old moorings and old lobster traps.

The divers also found a bunch of tennis and golf balls out there. Hmmm - I wonder where they came from? Kids who don't have a summer job may want to think about investing in a beach chair and sign offering fetch services for pet owners who overthrow their pet's fetch toys. It happens a lot more often than you think, and 99 percent of the time the kids swimming off the breakwater end up fetching the toys anyway.