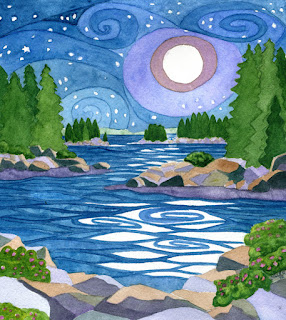 Sometimes the moon and moonlight is so big and so bright that it could be mistaken for daylight if I didn't logically know better. We'll land ourselves a full moon once in a while out sailing - it's magical. I leave the tent flap open on my side for as long as I can to observe our surroundings. It's fascinating and mysterious and all kinds of things move around and make noise in the night. Owls are always the most special. Anchored off the tip of Peter Island in the Damariscotta one night we heard an owl having a hootenanny with his or her buddy at the other end.

As I write this I am reminded of another recent full moon night. It was the Supermoon or "the perigee-syzygy of the Earth-Moon-Sun system,” that occurred this past March. I was heading south through Carrabassett Valley along the river on my way home from a BBQ and growing more and more irritated by the car coming toward me that wasn't dimming it's lights. At some point I realized it wasn't the car lights that were bothering me, but the blasted moon. I was driving right at the rising moon and the light was broadcasting so brightly, it was like having one huge headlight in my face.

As it turned out, and as all of you already know, that moon was 14 percent bigger and 30 percent brighter than when it is on the far side of its elliptical orbit around the Earth. On that night, the Supermoon was just 221,802 miles away from Earth with the entirety of its Earth-facing surface illuminated by the light of the sun - all happening at about the same time.

The event was very cool, but unlike most folks who undoubtedly had a spiritually cosmic experience - as I would have liked to have had - I will probably always remember it as just a big headlight in my face.