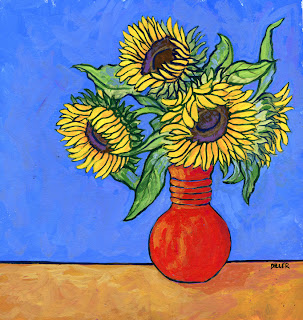 I received these sunflowers from a couple of friends of mine who stopped by for a visit a couple of weeks ago. What is it about getting flowers that's so special? Oh God, have I been brainwashed? Oh God, who cares.

Of course Van Gogh came to mind when I first saw them. He was obsessed with sunflowers until his death in 1890, so I decided to be obsessed for a minute or two, too and cruised the internet in search of more information. Besides, I wasn't even sure these were actually sunflowers or some hybrid or other new species. What you thought was a sunflower when you were growing up has been genetically engineered into something with a name you'll never remember.

I happened to catch an article out of the corner of my eye about Van Gogh's sunflowers. It turns out they were mutants. Researchers have been trying to solve the genetic origin of the mutant “teddy bear” sunflowers depicted in his paintings for years.  This is what happens when you fall asleep in art history class - I was suddenly feeling really ignorant.

In 2008 a plant biologist named John Burke at the University of Georgia, described a family of sunflower genes he thought might lead to the abnormal floret varieties - like Van Gogh's.  In a new study, he cross-bred multiple sunflower varieties — typical, double-flowered and tubular — to trace any genes tied to their appearance.

He discovered that two different mutations to a single gene, called HaCYC2c, could in part guide floret symmetry growth.  “When we started, we had some good gene candidates but didn’t know which genes were involved,” Burke said. “We knew it must be a gene that affects symmetry, and we suspected genes in this family, but we didn’t know which one or ones in particular.”

“Just like humans, sunflowers have two copies of every gene,” Burke said. Two copies of one kind of mutation to HaCYC2c, called “tubular,” causes all of the florets to resemble disc florets, even those lining the edge of a flower.  "When you have two ‘double’ mutant copies, you get double-flowered heads with all ray-like florets,” Burke said.

To be continued in what I hope is a way more interesting art history class than the one I don't remember.