Gearing Up and Gifford's 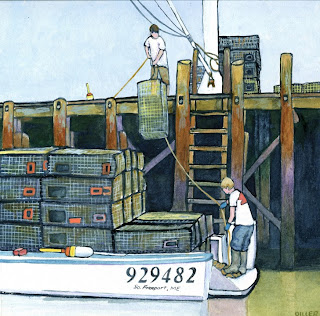 One gray day in Maine I decided to go out and get lost in my car.  I eventually landed in South Freeport at the public landing on the Harraseeket River.  I had never been there and discovered a restaurant, a lot of boats out in the anchorage, a marina and a yacht club.

It was low tide.  Miss Jody's captain was loading traps alongside the landing.  The radio from his truck was blasting country in the background as he barked loudly, lowering one trap after another to the kid below on the boat.  I went down onto the float to get a better view and watched for a while.  It was fun just hanging out there - kind of like watching a reality show in reality.  I know fishing can be hell, but there is a certain romance about it.  Maybe it's the danger - going up against the  elements like fishermen do that fascinates me.  How many of us challenge mother nature in our lives anymore or ever?

I also love the gear they use.  The boots, the boats, the buoys, the ropes and the traps.  As a designer, the traps really knock me out. They are incredibly cool, which led me to wonder who designed them? I know how a trap works, but also figured there were some folks out there who didn't,  so I went on a search and find and found some fun stuff for you all to read - see the links below.

I snapped a few pics of the guys working and went back up the gangway when I noticed a Gifford's Ice Cream sign hanging over one of the takeout windows on the right side of the entrance to the restaurant.  I'm not supposed to eat ice cream, but occasionally do, so I strolled over to see what they had for flavors.  My favorite, Moose Tracks, was missing.  The girl at the takeout window must have noticed I was struggling - good for her - and told me I could order half and half.  It felt like Christmas in August.  I had a small chocolate chip cookie dough/chocolate cone. It was terrific.

1. Here's a cool web site about lobsters I found: http://www.gma.org/lobsters/index.html

2. For those of you who don't know how a lobster trap works, here you go, right from New Gloucester: http://www.youtube.com/watch?v=U6N8dQQIIdg

3. The inventor of the wire (and way lighter) lobster trap: http://www.sunjournal.com/node/243524


Posted by claudiadiller at 6:18 AM