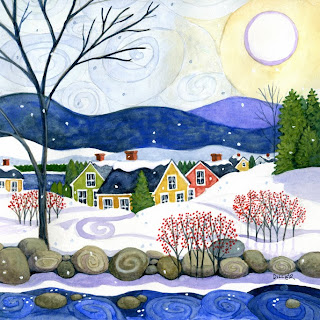 I had mixed feelings about the prospect of getting hit with a big snow storm this past week. The mountains needed a dump badly, but I was due to leave Boston for Seattle to spend the holidays with my kids. If the sucker stalled I would be spending the next week trying to hitch a ride in cargo. It was a mental conundrum.

My solution was to envision a timely, tapering storm. As it turned out, the 'ol mojo still works. Elecktra came, dumped and left right on time. Today is truly a divine holiday gift.

In the meantime and unbeknownst to me, I found out The Weather Channel now uses names for winter storms (though the national weather service doesn't). The decision to begin naming storms was a way to communicate severe weather information on all platforms, including social media. Hashtags are a big part of social media, and naming a storm proved to be the best way to efficiently and systematically convey information about one particular storm.

The name Elecktra, not your regular Jane-type name, intrigued me. I got to explore this while waiting for the plow guy to come. He was a no-show, so I had a lot of time on my hands.

First, she is a Marvel Comics character. If you're interested, here's the link with everything you've ever wanted to know about that Elektra.


Electra, ( Greek: “Bright One”) in Greek legend, the daughter of Agamemnon and Clytemnestra, who saved the life of her young brother Orestes by sending him away when their father was murdered. When he later returned, she helped him to slay their mother and their mother’s lover, Aegisthus. Electra then married Orestes’ friend Pylades. The plays of the same name written by Sophocles and Euripides and the Choephoroi by Aeschylus vary the theme in detail. Many later artistic interpretations of her life exist, including Hugo von Hofmannsthal’s play Elektra (1903), later made into an opera by Richard Strauss (1906–08), and Eugene O’Neill’s play Mourning Becomes Electra (1931).


And finally, she's a complex. Thankfully this was not an American idea though I am a Jung fan.

In Neo-Freudian psychology, the Electra complex, as proposed by Carl Gustav Jung, is a child’s psychosexual competition with her mother for possession of her father. In the course of her psychosexual development, the complex is the girl's phallic stage; formation of a discrete sexual identity, a boy's analogous experience is the Oedipus complex. The Electra complex occurs in the third — phallic stage (ages 3–6) — of five psychosexual development stages: (i) the Oral, (ii) the Anal, (iii) the Phallic, (iv) the Latent, and (v) the Genital — in which the source libido pleasure is in a different erogenous zone of the infant’s body.