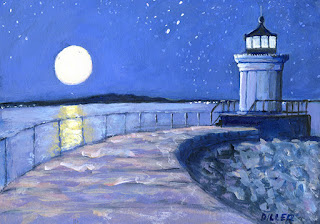 I was out at Bug Light one evening last week trying to imagine what it might feel like to be sitting there on a summer evening waiting for the moon to rise. The moon would be further north than it is now, so I have sketched it that way here.

One of the many floating cities that visit Portland's harbor every season lumbered by, lit up like a, well, city actually. With a scheduled 6:54pm moonrise, I wondered if the cruise ship would obliterate the object of one of my favorite games - guessing where the moon pokes up on the horizon. It was going to be close. Fortunately and soon after the iron beast passed by, I was able to detect a faint reddish glow left behind in it's wake.

As it ended up, I was only two knuckle joints off on my calculations. I then settled back and watched as the moon slowly lifted off like a huge luminous balloon, heavy with millions of souls like me who were holding on for another glorious and sleepless, all night ride across a seemingly endless night time sky.

Posted by claudiadiller at 12:23 PM