A Make Believe Place in the Off-season at Biddeford Pool 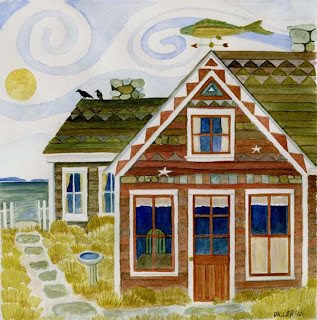 My friend Ellen had a long stretch of time to kill between two appointments here in Portland so she asked me if I wanted to go explore. I suggested Biddeford Pool - Tom and I had kayaked out of there many years ago, but we never really checked it out.

Biddeford Pool is a small mostly summer community on the south side of the mouth of the Saco River. It's five or six miles southeast of downtown Biddeford on 208. The Pool is actually a large tidal pool that goes to mud at low tide, but is kept drudged at the mouth where it empties into the Saco. There were a couple of lobster boats out there.

The community is a mix of little original houses (it was the site of Maine's first recorded permanent settlement then called Winter Harbor - circa 1616), and newer minor McMansions which are way too big and really too obnoxious for this little bit of land. We tooled around looking for a place to eat and ended up at a boat landing which also looks like the center of "town" on the Saco where you could spit across to the other side of the river, but couldn't get there. So we backtracked and took a trip out to the East Point Audubon Sanctuary that at first looked like a golf course it was so green and flat. It was a little too cold and blustery to walk, but if you wanted to they do allow parking on the street. We continued our drive along the ocean side of the community which was below sea level - or so it seemed. The water was boiling and pretty damn scary-looking. I don't know how people do it - there were waves slamming those rocks (called Jordan Rocks), as if their sole purpose was to one day reach those houses.

We meandered in and around the community which was pretty much closed up for the season, and although the dunes grass was all yellowed, it was still summer-like in a way because you could, even on a fall day like that one, imagine it being summer there. I picked out houses I could live in and others I couldn't, and imagined spending a summer in a place like this. Even saw a couple of crows I would paint flitting here and there. I came home and did a quick sketch of a make believe place in the off season at Biddeford Pool.

Posted by claudiadiller at 6:45 AM