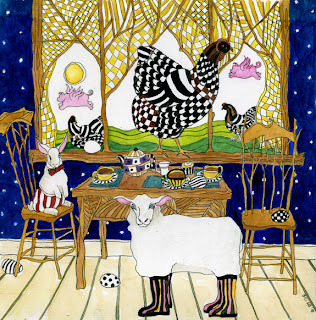 Delusions are one of my favorite pastimes.  They come mostly and with great intensity when I am a little sicker than normal, and right now I am. I've got the flu.

This particular delusion was kind of strange even for me. I think it may have had something to do with an excursion Tom and I took to the Chewonki Foundation's headquarters in Midcoast Maine a couple of weeks ago on a coffee run. The Chewonki Foundation "fosters an appreciation for the natural world and for working in the community for others." Check it out:  www.chewonki.org

So we were meandering around the grounds and ended up at the farm part of the compound where the students and staff grow and raise their own food. There were sheep, a heifer, a horse, and chickens just about everywhere. The chickens are what intrigued me the most because they had full run of the grounds and outbuildings.  They were in the asparagus patch, in the manure pile, and with the horse, which was sound asleep on his feet. We found chickens up in the rafters in the barn, in the flower gardens and in the nearby woods. At one point I really felt like they might even occupy the farmhouse because there were no people to be seen anywhere around, nowhere, zippo. If I wasn't with Tom I might have thought I was in a Hitchcock film and would have started backing up very, very slowly.  There was one rooster that spent the whole time nervously herding indiscriminately. It was kind of fun making him nervous actually!

Anyway, I'm passing this all along because the delusion was about giant chickens and other farm animals that did occupy a farmhouse. I'm only guessing it had something to do with the Chewonki experience, but who knows. All I can say is that when the spirit moves you, you go with the spirit. For whatever reason, the above painting came out the way it did and remains a complete mystery to me. I guess that's why I like delusions so much - they are a great mystery in what can sometimes seem like a less mysterious world these days.